Most video games are about story — some more than others. The LA Times review of the new game “Fallout 4” dings it for errors of both AAA and DHY, though they don’t have the terms for it. 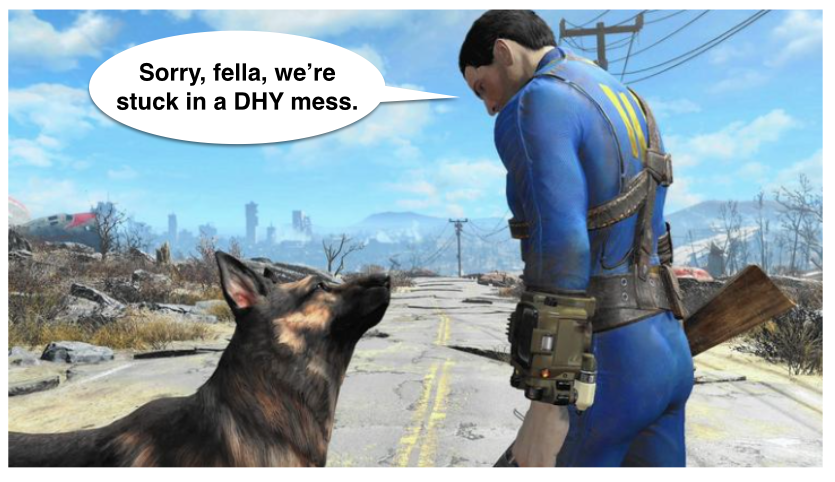 This is what we’re talking about with the ABT Framework. Once you get down the basic elements of the Narrative Spectrum, you start seeing them everywhere. Like the LA Times review of the new video game “Fallout 4.”

Stories begin with AAA (and, and, and). It’s called exposition — an assemblage of neutral facts that don’t yet engage the narrative centers of the brain. Not enough exposition and the story is confusing. Too much, it’s boring.

The LA Times reviewer for the new video game Fallout 4 says it took him 10 hours just to get to “the game’s first major city,” which he says was the first moment he began to actually warm to the game. That’s kind of like the end of the first act — the story is finally up and running, the audience is engaged.

What’s a bigger concern is the overall feel of the game being just too complex. After 10 hours of play the reviewer says, “It still feels as if I’ve opened a board game for the first time, and before me lies the virtual equivalent of hundreds of tiny plastic pieces and the overwhelming dread that mastery won’t come easy.” This is the situation I’ve described in my new book as DHY — Despite, However, Yet — representing the situation of too many narrative directions at once.

It’s clear that the game is just too muddled — too much narrative, too many directions, too much detail. It lacks the simplicity of narrative that make stories popular. He reflects this by making references to simpler games of which he is more fond, by saying, “I miss the ease with which Lara Croft traversed ruins, and I miss the relative svelte nature of its story.”

The point of this post is not about video games (I don’t have the time to spend 10 hours just getting into one, though I wish I did). The point is how broadly the Narrative Spectrum applies to any world in which story is present. Show me a story, any story, and I’ll show you the forces of AAA, DHY and ABT at work.