A metrics-driven society inevitably ends up with metrics-driven debacles. For polling, the tradition of bogus results goes back to the 1940’s and is stronger than ever today. What’s the consequence? In a “Trumpian culture” (as the article terms it) the power is to those who have a command of narrative. 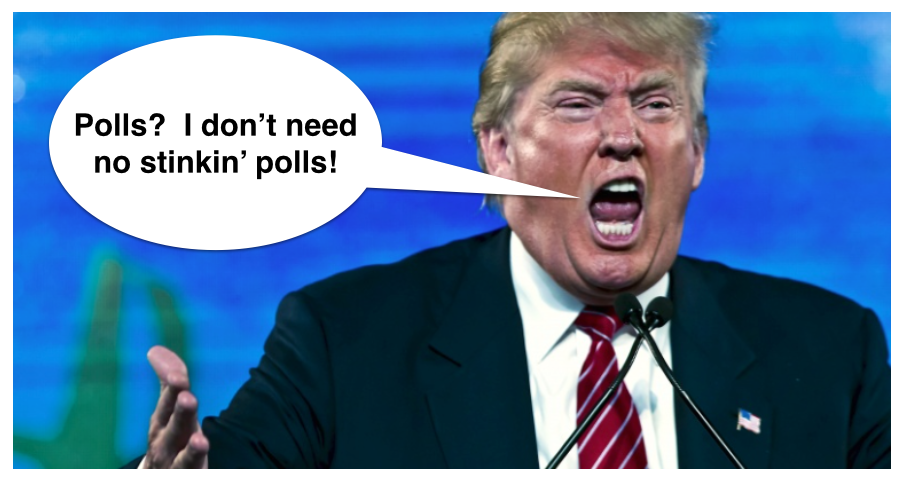 WHO NEEDS POLLS WHEN YOU’RE A MASTER OF NARRATIVE.

In 1992 I helped with running phone polling for Bill Clinton’s Presidential campaign in New Hampshire. I was a professor at UNH and it was still the first in the nation primary state. For probably a dozen nights I did phone calls with about five other people in the small campaign office in Portsmouth.

What struck me the most was the number of hang-ups. Not many rude comments, just the majority of people not wanting to answer the questions we were calling to ask. That was the start of my big time susipicion of all polling data. Why weren’t we concerned about the biases of this huge level of non-participation?

This is a major dimension of Jill Lepore’s excellent article in this week’s issue of The New Yorker titled, “Politics and the New Machine: What the turn from polls to data science means for democracy.” She has just the sort of critical perspective I subscribe to The New Yorker for, diggin waaaay back into the history of polling in America to show how much of it has been bogus for at least 70 years.

A HISTORY OF EPIC POLLING DEBACLES

You would have thought polling itself would have gone extinct in 1948 when Gallup himself said of his prediction that Dewey would beat Truman the whole world would see, “how good we are.” He should have been tarred and feathered back then with “Gallup” being as culturally discredited as Benedict Arnold, instead of giving rise to the sacred Gallup Polls of today.

The article points out how the process of polling in America (which emerged in the 1920’s, back when it was exciting to be asked your opinion, resulting in over 50% participation), has now dwindled to “single digits” for almost all phone polling. Meaning I wasn’t alone with my New Hamphire “no thank you” experience.

In 2005 when I set to work on my documentary “Flock of Dodos” about the evolution controversy in Kansas I listened to my interview subjects talk about the “statewide” polls on support for the teaching of evolution. Which seemed impressive except for one minor detail — my younger brother, who at the time worked in the oil fields of Kansas — kept reminding me, “NOBODY in this state cares about this stupid issue — they care about jobs — it makes them angry when they see evolution on the front page of the newspaper.” Which I had already sensed just from talking to my old high school and college friends there. The public concern was largely manufactured by journalists.

The thought that kept running through my head ends up being exactly what Lepore addresses. She writes, “The first question a pollster should ask,” the sociologist Leo Bogart advised in 1972, is, “Have you thought about this at all? Do you have an opinion.” EXACTLY!!!

That is exactly what I kept thinking — how many of these working class people in Kansas have really digested this issue of evolution versus creationism and decided they have a clear and strong opinion. The number was probably statistically indistinguishable from zero. So much bogusness.

Thus my concerns for today. Who are the people being polled for the endlessly quoted and worshipped climate polls? So much bogusness. So much time and resources spent on numbers, some of which become self-fulfilling — “Well, we were going to launch a campaign and actually DO something, but … our polling shows …”

The concern is sample size. How do you extrapolote a poll of 200 Americans to a population of 200 million voters? Lepore addresses these very concerns in her article. The answers she encounters further define the bogosity of it all — especially quoting Bill McInturff of Public Opinion Strategies saying, “The people we have trouble getting are less likely to vote.”

He’s saying they are confident that their tiny sliver of the population who will actually answer their questions are enough to gauge the entire voting public. Says who? What’s that based on? Probably a poll of voters asking them who they think are most likely to vote. Piles of endless circularity.

The fact is people worship data. I still love the quote from uber-cynical climate skeptic Fred Singer in my movie, “Sizzle: A Global Warming Comedy,” who talked about models he was commissioned to create to predict the price of oil 50 years in the future. The people paying him knew the models were bogus, he knew the models were bogus, and nobody cared — he got paid and they got their numbers to argue with. Ugh.

There are not enough critical journalists in the world like Jill Lepore. Which is a shame. Her article is excellent. At the core it is questioning of “scientism,” (the worshipping of science, including metrics) which is what the world needs more of.

Anyhow, do the math (bad pun), add it all up, and the net result ends up being Trump. Very simple. In my webinar on Dec. 1 I’ll mention how with the ABT you can show quantitatively that Trump has a far better grasp of narrative than the other candidates. And actually, you don’t even need the numbers — just understanding narrative structure a bit you can see how he is a master of it, talking in tight loops of problem-solution (albeit cheating), in a way that the masses love. In the language of Robert McKee, Trump talks archplot, the other candidates (especially Democrats) talk miniplot.

He’s dropped a bit in the polls, but he still has the commanding presence. As Lepore mentions, the polls these days are based on such small sample sizes and have so much noise they are virtually meaningless. Which is why, as she points out, there were recent total poll shockers in the UK and Isreal, not to mention poor old Mitt Romney thinking he was going to win. It’s all cuckoo.

The best line of the article is quoting Arthur Lupia who says that horse-race polls (like the current Presidential polls) should be labeled, “For entertainment purposes only.”