It was a perfect day in Fort Collins, Colorado as 35 scientists and communications folks from three government agencies (USDA, USFWS and USGS) spent 6 hours with the ABT Framework. 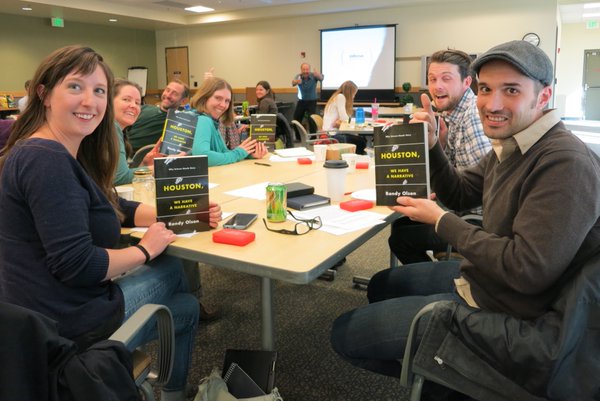 THE WINNING TABLE. Their scores for the Abstract Analysis exercise were shockingly close to ours, earning them copies of the good book, signed by the madman with the broken thumb in the distance.

In February two Story Circles with USDA wrapped up in Florida while last week a new Story Circle within USFWS launched.  Another is due soon and Tuesday’s Demo Day will probably produce more. Story Circles is fun, it goes to the heart of the communications challenge, and an article in Sunday’s NY Times magazine about Google’s realization of the power of social interactions in work settings helps underscore one of the greatest attributes of Story Circles — the group dynamic.

Here’s a quote from the article that tells about why the sort of small group dynamics fostered by Story Circles is so much in line with today’s work environment:

As commerce becomes increasingly global and complex, the bulk of modern work is more and more team-based. One study, published in The Harvard Business Review last month, found that ‘‘the time spent by managers and employees in collaborative activities has ballooned by 50 percent or more’’ over the last two decades and that, at many companies, more than three-quarters of an employee’s day is spent communicating with colleagues.

YES, IT IS POSSIBLE TO BOTH ENGAGE AND BORE AT THE SAME TIME

With every Story Circles event we seem to have at least one major new revelation.  On Tuesday, it dawned on me that you can put together a series of really engaging ABT’s, and yet, if the overall structure is AAA, guess what — you will both engage on the fine scale as you ultimately end up boring overall due to narrative emptiness on the larger scale.

It happens all the time with TV shows (especially on channels like Discovery and National Geographic).  The show is made up of a series of absolutely fascinating ABT vignettes that pull you in and hold your interest.  But you get to the end and realize there’s no overall significance to what has been presented — it’s just a bunch of cool stuff.  In ABT terms, there’s no “therefore” (also kinda like a lot of social media, btw).

Which is okay.  I have a section in the book titled, “AAA, Not That There’s Anything Wrong With It.”  And that’s the deal.  There’s nothing wrong with an hour long show about what sharks feed on.  But it’s just a little bit better if the individual ABTs eventually work together to create an over-arching ABT rather than just a bunch of “and, and, and” material.  This is also about the fractal nature of story structure which I mentioned in the book.

So once again, the power of narrative is about mediocrity versus excellence.  If you’re happy with a half baked one day storytelling workshop, that’s fine, BUT … if you’re a fan of full baked (as Dustin Hoffman was in “The Graduate” — one of my favorite scenes is him telling his dad that his crazy ideas are fully baked), then you better bite the bullet with Story Circles and get the full ten weeks of training.

Sorry it can’t be quicker and easier, but the cruel fact is that you get back what you put in.  Which makes it like life in general, right?