I don’t mean any disrespect, I’m just talking narrative structure here.  The Gettysburg Address is a structural masterpiece.  Tyson’s exercise, while having a nice point to it, is narratively muddled. Although Neil Degrasse Tyson is a fun media icon, it’s worthwhile to point out he does not have deep narrative intuition — not like novelist Michael Crichton nor Nobel Laureate Richard Feynman.  And did he really mean to say, “comprised of”? 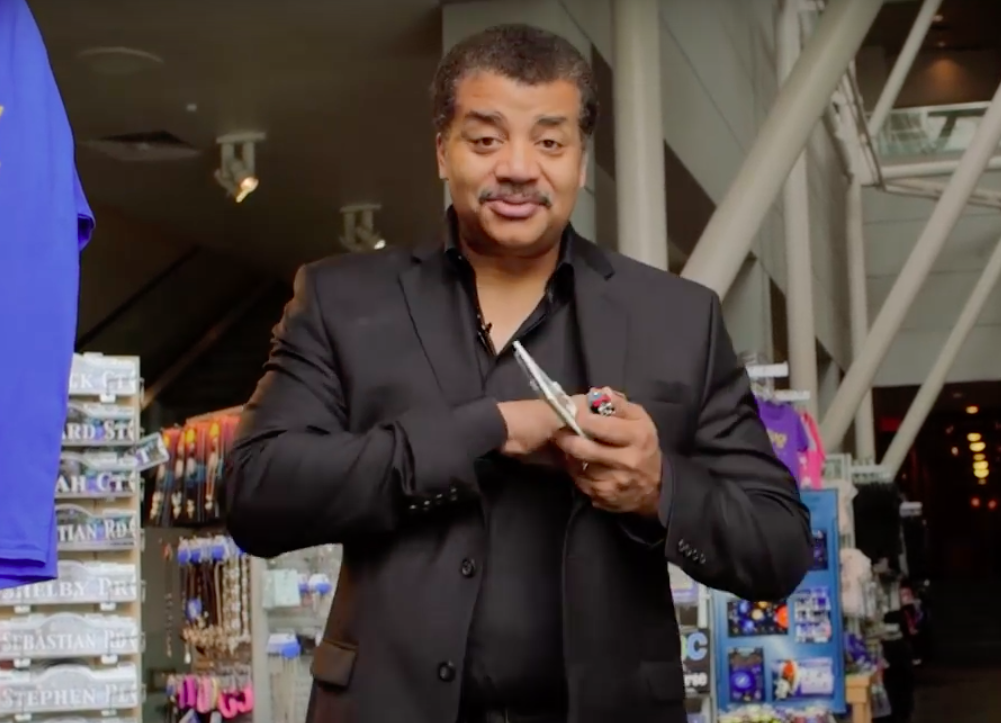 LINCOLN KNEW NARRATIVE (TYSON NOT SO MUCH). Lincoln had a Narrative Index of around 21. Neil Degrasse Tyson is more in the range of 11 (the three speeches I’ve found score 9, 11, 14). It shows when he attempts to emulate Lincoln.

For three years now I’ve been holding up the Gettysburg Address as a model of the ABT structure. I examined it in detail in my book last year. I’m willing to argue with anyone who wants to disagree that the number one reason the speech retains it’s power and has stood the test of time is it’s narrative structure.

Nobody has really pointed to this attribute of the Gettysburg Address so far, or if they have they’ve done it in a overly-complicated way. Ken Burns did an entire NOVA episode about the Gettysburg Address, but narrative structure wasn’t even on his radar screen. You kind of need to have some feel for ABT structure to really see it.

GETTYSBURG ADDRESS: A PARAGON OF ABT STRUCTURE

The speech is simple and has a solid ABT form. The first paragraph is exposition. The second paragraph begins by stating the problem (“Now we are engaged in a great civil war”). The third paragraph has more than one “therefore” but is essentially “it is for us the living” to make sure that “these dead shall not have died in vain.”

This narrative structure, more than anything else, accounts for it’s enduring power. Joseph Campbell would be the first to agree with this. It’s about story, dude.

Which means that anyone wanting to put themselves in the same company of Lincoln and his great speech really ought to attempt an equally clean and powerful ABT structure.

Astrophysicist Neil Degrasse Tyson, who is a great promoter of science and lots of fun, attempts exactly this with a new video. He delivers his own speech of the same length as the Gettysburg Address. He has a very nice point to it — that Lincoln also created the National Academy of Sciences which is today very important. But the way he presents his argument is muddled.

His first paragraph is an ABT, sort of, using “yet” instead of “but.” But the “therefore” is disconnected in terms of logic — opening with war, then suddenly jumping to science.

From there he slumps solidly into “and, and, and” mode stating a series of facts about science. The net result of his speech conforms to the section in my book I titled, “And, And, And, not that there’s anything wrong with it.”

There’s not anything informationally wrong about Tyson’s speech, it’s just that narratively it’s a jumbled mess. The over-arching ABT structure is lacking because the “problem” is not clearly laid out.

With the Gettysburg Address Lincoln laid out the problem clearly in the second paragraph — that we are torn apart by war. The whole paragraph elaborated on the problem, leading to the build that was paid off in their third paragraph with the clear admonishment (the “therefore”) that “these dead shall not have died in vain.”

There is a “therefore” in Tyson’s last paragraph, but it’s not all that compelling. Basically he says “the time has come” rather than, “we must,” as Lincoln did.

Therefore … I’m sorry to be rude, but there is a science to great communication. A major part of it is narrative structure. Without it, it’s hard to ascend to the greatest heights.

Here’s the text of what Neil says in his short video. Again, there’s nothing wrong with this, it could just be more powerful with some attention to narrative structure, as I do in the next section.

One and a half centuries ago, civil war divided these united states of America, yet in it’s wake we would anneal it as one nation indivisible. During the bloody year of his Gettysburg address President Lincoln charted the NAS comprised of 50 distinguished American researchers whose task was then, as now, to advice Congress and the executive branch of all the ways the frontiers of science could contribute to the health, wealth and security of it’s residents.

As a young nation, just four score and seven years old, we had plucked the engineering fruits of the industrial revolution that transformed Europe, but Americans had yet to embrace the meaning of science to society. Now with more than 2000 members the National Academy encompasses dozens of fields undreamt of at the time of Lincoln’s charter. Quantum physics discovered in the 1920’s now drives nearly one third of the world’s wealth, forming the basis for our computer revolution and the creation, storage and retrieval of information. And as we continue to warm our planet, climatology may be our only hope to save us from ourselves. During the centennial of it’s charter, President Kennedy addressed the Academy, noting the range and depth of scientific achievement in this room constitutes the seabed of our nation’s future.

In this, the 21st century, innovations in science and technology form the primary engines of economic growth. While most remember Honest Abe for war and peace, for slavery and freedom, the time has come to remember him for setting our nation on a course of scientifically enlightened governance, without which we all may perish from this earth.

MY REWRITE OF HIS FIRST TWO PARAGRAPHS

Hate to be a school marm, but this is for the benefit of everyone interested in seeing the power of the ABT approach. Here’s a rewrite of his first section, and the start of the second. I’m not attempting any flowery prose, just laying out the fact of the “argument” that ought to be made. The object is to keep the exposition singular and clean — meaning no narrative twists. The story begins with the second paragraph.

America is a great and mighty nation with a complex history. Certain aspects of it’s founding were misguided and resulted in a tragic civil war. Abraham Lincoln presided over those most painful years. He was a visionary who played a fundamental role in righting those societal offenses.

But there is something more to what Lincoln gave us during his truncated presidency — something that plays an enormous role in our society today. He created the National Academy of Sciences. (details on what this has meant)

Four score and seven years ago our fathers brought forth on this continent a new nation, conceived in liberty, and dedicated to the proposition that all men are created equal.

Now we are engaged in a great civil war, testing whether that nation, or any nation so conceived and so dedicated, can long endure. We are met on a great battlefield of that war. We have come to dedicate a portion of that field, as a final resting place for those who here gave their lives that that nation might live. It is altogether fitting and proper that we should do this.

But, in a larger sense, we can not dedicate, we can not consecrate, we can not hallow this ground. The brave men, living and dead, who struggled here, have consecrated it, far above our poor power to add or detract. The world will little note, nor long remember what we say here, but it can never forget what they did here. It is for us the living, rather, to be dedicated here to the unfinished work which they who fought here have thus far so nobly advanced. It is rather for us to be here dedicated to the great task remaining before us—that from these honored dead we take increased devotion to that cause for which they gave the last full measure of devotion—that we here highly resolve that these dead shall not have died in vain—that this nation, under God, shall have a new birth of freedom—and that government of the people, by the people, for the people, shall not perish from the earth.