Donald Trump knows narrative better than any politician, ever.  He doesn’t know storytelling.  It’s not the same.  He knows narrative, which is the problem/solution dynamic.  Here are 5 ways in which he shows he has deep — very deep — narrative intuition.  Trust me on this.  I published a book about narrative last fall.  Since the start of his campaign I have been astonished at how he communicates.  He is the embodiment of the ABT Framework, and he speaks in the simple archplot structure the masses embrace.  Which means I haven’t been surprised at his steady success, though the NY Times has been. 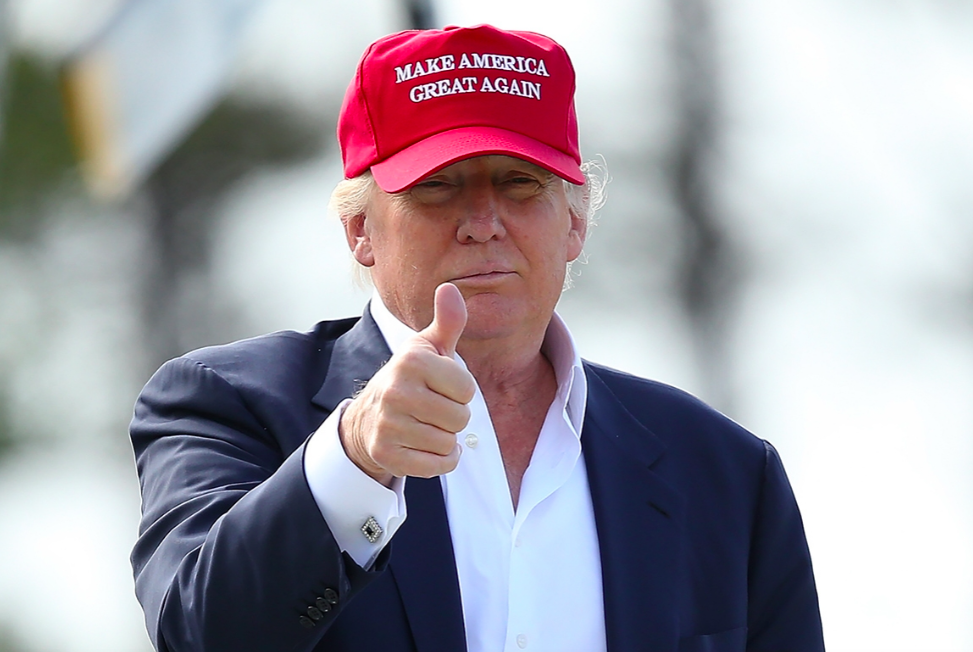 MAKE AMERICA ARCHPLOT AGAIN. To speak in pure archplot structure you almost have to engage in fiction — it’s just too hard if you’re constrained by the truth. Trump laughs at the truth, and is a master of archplot.

Donald Trump is a master of narrative.  In “Houston, We Have A Narrative,” I offer up a very simple, albeit crude, definition of the word narrative as, “The series of events that occur in the search for a solution to a problem.”  By this definition, Trump lives and breathes narrative.

Trump is legendary as a “dealmaker.”  What does that term mean?  It is a person who sits down at the table, quickly figures out the problem that needs to be solved, then solves it with the deal.  It’s what he does all day long and is how he approaches the world, endlessly.

When you start to listen to him from the perspective of narrative dynamics (again, narrative, not storytelling) you see how much he embodies the core principles.  Here is my list of the top 5 narrative traits I see in him.

This is the antidote to boredom.  Boring people get stuck on one topic and fail to move forward or “advance the narrative.”  Avoiding this problem is built into the ABT structure.  It’s what happens with the word “therefore” — the word of consequence.  If somebody describes a problem, then keeps going, talking on and on about just the problem, eventually someone will blurt out, “THEREFORE … ? Therefore what are you going to do about it?”  That is advancing the narrative.

I’ve heard a number of eggheaded political pundits over the past few months trying to diminish Trump’s communication skills by saying, “he just rambles all over the place in his speeches.”  Well, yes, to some extent, but what they are failing to perceive is the tight ABT structure (And, But, Therefore) on the fine scale which holds the interest of listeners.  And actually, he does have a clear overarching narrative which is the following …

Trump has a single message of “Make America Great Again.”  You may think it’s ludicrous, but if you do you’re just identifying yourself as someone who doesn’t get how the public thinks.  They don’t want to hear complex, subtle messages.  One of the main critiques of Hillary has been that she’s too caught up in “nuance.”  To Trump, “nuance” is like a cockroach, meant to be stepped on.

At the top of McKee’s Triangle (see Chapter 12 of the new book) is Archplot which I’ll talk about in detail in a bit.  One of the key characteristics is the “singular narrative” — meaning for example that in epic stories, there is still the one character, from Luke Skywalker to Dorothy to Spartacus, who provides the singular overarching narrative structure.

Trump has accomplished singularity from the very start of his campaign with his simple slogan. That slogan wasn’t something his pollsters figured out halfway through.  It was him, him, him from the start.  Don’t you see it?  The guy has deep narrative intuition.  He opens his mouth, what comes out is narratively structured.  This is why he has scored TV ratings for the debates like no one has ever seen.  There has never been a candidate with this deep of a connection to narrative structure.

The one piece pointing this out at the most superficial level to date that I’ve seen was a writer at Vox who noted the recurrent problem/solution structure of Trump’s speeches.  But all that writer did was make a note of it.  He didn’t attempt to quantifying it or pinpoint how the dynamic works or why it’s important.

In my new book I offer up what I have labeled as The Dobzhansky Template.  For Trump, he would use it to say, “Nothing in America makes sense except in the light of greatness.”

The more specific term for him for this would probably be, “exceptionalism,” but he’s gone with “great.”  This is his one, singular, unifying term which becomes incredibly powerful.  I could easily see the masses at his rallies just shouting, “Great!  Great! Great! Great!”

That one word conveys his entire message and agenda.  He truly gets this stuff.

As Robert McKee tells about in his landmark 1997 book, “Story,” there is a consistent structure to the great stories that persist over the ages reaching all the way back 4000 years to the epic story of Gilgamesh.  This structure he terms “archplot” and identifies it’s key characteristics.  These traits include the singular narrative (making American great again), an active hero (Trump is seen as a fighter), linear time sequence (he rarely jumps back into history), complete causality (everything in his world is simple and makes sense), and closed ending (everything’s going to have a happy ending).

Trump opens his mouth, what flows out is pure archplot.  The simpler version of archplot is the ABT (And, But, Therefore) structure.  Over and over again, you can hear it in everything Trump says.  “We love the Mexicans AND we want the good ones to be part of our society, BUT there are too many illegals, THEREFORE we have to build a wall.”

It is how he views the world — simple problem, simple solution — custom made for the ABT.

This is where he goes off into the land of fiction.  Everyone knows “the wall” with Mexico is not realistic.  It is fiction.  But it is simple and thus powerful.

One extension of the ABT is the simple Narrative Index I have devised.  He scores a 29 which is higher than any politician I’ve analyzed, and his score is double that of Hillary (14) which I promise you will be a major factor this fall.

5) THE POWER OF STORYTELLING RESTS IN THE SPECIFICS

He knows this rule sooooo well.  He uses it to his advantage on offense — naming names in his attacks on opponents, and even further by coming up with SPECIFIC nicknames for Lyin’ Ted, Little Marco, and Crooked Hillary.  Those names are incredibly specific.

But then he also uses the reverse of this rule in his statements on policy, at least right now, holding off on specifics and thus weakening what he’s saying, leaving less to attack.  This week on Meet the Press he was vague, waffling, and two-sided on everything from minimum wage to tax cuts.  He knows better than to get pinned to specifics this early.

Not sure how many times I can keep repeating this.  People who are thought of as “entertaining” over the long term achieve that label for one main reason — they succeed with narrative.  If they fail with narrative, no matter how outlandish they are, they will ultimately bore then annoy the public.  That’s because they do the same repetitive schtick, meaning they fail to “advance the narrative.”

No one major is calling Trump annoying or boring (aside from those who hate him for his politics) in terms of his communication style.  More importantly, no television network is calling him annoying or boring.  They continue to give him endless free coverage.  Why not, he generates huge ratings.

THE MEDIA IS STUPID IN IT’S ANALYSIS OF DONALD TRUMP

This past week the media critic Jim Rutenburg at the NY Times talked about the shoddy job the media, including NY Times, has done in covering Donald Trump.  He said, “… this season has been truly spectacular in it’s failings.”  He added, “The mistakes piled up the bad predictions, the overplaying of every slight development of the horse race to the point of whiplash, the lighthearted treatment of what turned out to be the most serious candidacy of the Republican field.  The lessons learned did not.”

The analysis of Trump’s communication skills have been pathetically bad.  Just as Ruttenburg says — the media have laughed at Trump and done silly, substance-lacking “analysis” such as talking repeatedly about the level of grade school he communicates at or his tendency to use “we” and “us” more than other politicians.

I have warned since last summer that this guy knows media better than ANY politician in history.  As Trump biographer Michael D’Antonio was quoted in USA Today on Sunday, “Trump is the most manipulative person in the world.”  Amen, brotha.

The New York Times should be ashamed of themselves for the shallow, lame job they have done in analyzing Trump.