My favorite scientist of all time is gone.  I dedicated my first book to him.  He taught me the importance of “asking good questions” as a scientist.  And he told me a lotta funny stories. 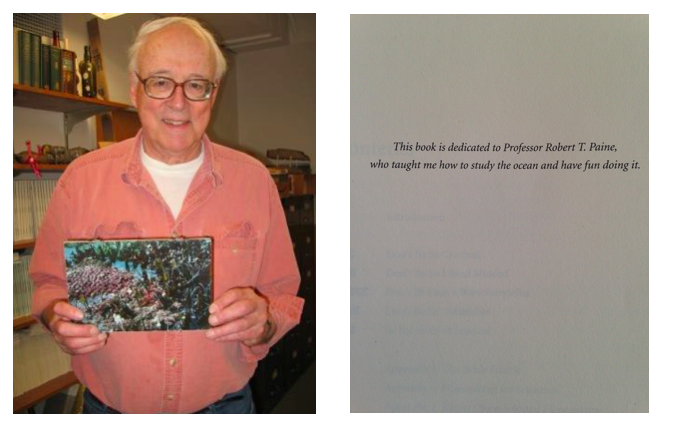 YOU GOTTA SMILE. Bob Paine was the best. He made everything to do with the oceans fun and interesting. I dedicated my first book, “Don’t Be Such A Scientist,” to him. He and the title were a perfect match.

A GIANT OF THE OCEAN WORLD HAS LEFT US

Let me start with a story.  I think the greatest joy I ever brought to the heart of Bob Paine was in the summer of 1978 when I was working as his field assistant on Tatoosh Island, had to take a dump out in the field, and told him I didn’t have any toilet paper so I used a few pages from Wilson and Bossert’s “Primer on Population Biology.”

Oh my goodness did he love that.  I was headed to Harvard that fall to start my PhD in the same department as the co-authors (in fact would end up being teaching fellow for both in my first year) and he just couldn’t get over it — daring me to tell them about how I had defiled their landmark book.

I spent a lot of evenings that summer sitting around the campfire next to the lighthouse on Tatoosh listening to Bob tell stories about his travels, science, fishing and bird watching, and seeking his advice as I drove him crazy with questions.  That was really all I knew to do in his presence.  His intellect was so great and I was such an utter peon that all I could ever think to do was ask him yet another question, though he was also a good listener (a key trait of a good storyteller), equally interested in talking about General Douglas MacArthur (my grandfather was his Chief-of-Staff for part of World War II), my upbringing in Kansas, and what it was like to live in a fraternity (he was a Harvard undergrad and never knew the experience).

My pathway to him was by volunteering for one of his graduate students, Tom Suchanek, who was also doing his field work on Bob’s beloved Tatoosh island off the northwest corner of Washington’s Olympic Penninsula.  The Coast Guard gave Bob exclusive access to the island.  The first year I helped on Tatoosh there were still Coast Guard families living on the island, but then the lighthouse was automated and everyone moved away.  As anyone who ever worked there can tell you, it was an amazing place to visit — alive with marine life, sea birds, wild flowers and storms blowing in off the open Pacific coast.

Bob Paine was the greatest.  I kept in touch with him constantly over the years — sending him letters from distant ports of call in my field work, then reconnecting with him a decade ago when we had a massive screening of “Flock of Dodos” in the huge 1,000 seat auditorium on the University of Washington campus.  He helped organize that event and my mother (the star of the movie who is now 92) sat next to him during the screening which was just plain wonderful.  I told her yesterday that he passed away.  She remembers vividly chatting with him that evening.

Just last fall I traded emails with Bob and he wrote this great bit that I’m sure he wouldn’t mind my sharing with everyone.  He played a huge part in my life — quite possibly the most important part as I ended up doing my PhD with one of his students, Ken Sebens at Harvard.

This bit made me very happy that I had developed something he was finding useful.  And look at how, in his early 80’s, he was still deep in thought on how ocean ecosystems work.  I will miss his voice for the rest of eternity.

I’ve found that your ABT approach to be very useful in organizing my thoughts on a new writing project about which I know very little. There’s lots written about networks [about which I’m naive], food webs are a network, Pisaster is a node in some of them, and there are now 6-7 experiments tweaking Pisaster, and Pisaster plays the network game differently. ABT will help me organize my thoughts and possibly avoid being tarred and feathered. But possibly this is just more procrastinating.