The political pundits aren’t buying my Narrative Index (it doesn’t speak their language), but the fact is it shows a lot.  Trump used to score above 20, always.  But since shifting to using a teleprompter and firing Corey Lewandowski his popularity has sagged as has the Narrative Index scores of his speeches.  Bottom line, he’s become bo-ho-horing.  Now the question is will his new appointments return him to the above 20 scores of his early days? 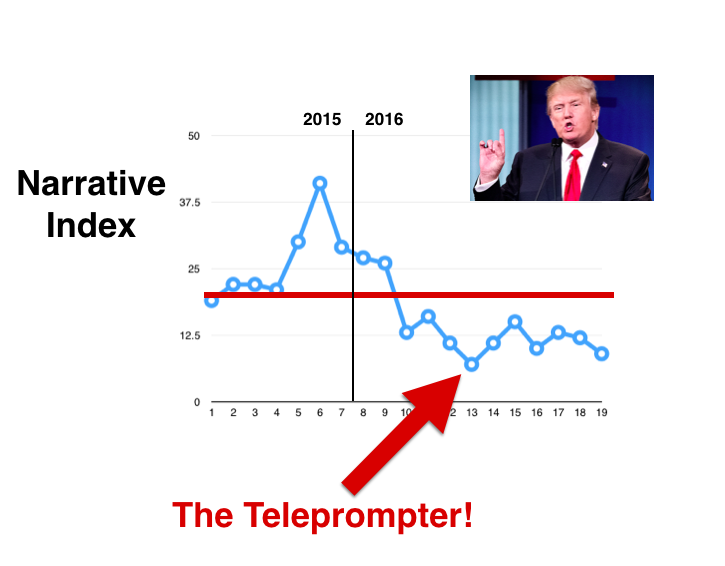 FROM ABT SLASHER TO BO-HOHORING DRONER.  In the first stage of his campaign Trump set record levels for narrative content in his speeches.  Then he turned “Presidential” and his Narrative Index plummeted, hitting rock bottom with his June victory speech that used a teleprompter and was viewed as uncharacteristically dull.  Now he’s entering his third stage.  Will his scores rebound?

Earlier this year, after pounding away at the political blogs with 5 different essays about using the ABT dynamics to analyze the narrative content of speeches (none were published), and finding that the political pundits are more innovation-averse than the dullest foundations, I finally just ended up reporting some of my findings in this blog.  No one important noticed, which was fine.  It’s only data, after all, coming from the guy who wrote three books on narrative structure and is now running narrative training with the best science institutions in the country.  Not likely he would know as much as journalists.

Regardless, a clear pattern has emerged for Trump.  He once gave speeches that had strong narrative dynamics.  Those speeches all scored over 20 for their Narrative Index (ratio of Buts/Ands times 100 to make a round number).  As soon as it began to look like he could win the nomination and he began thinking more about what he was doing — including trying to be more “Presidential” by using a teleprompter — his scores plummeted.  The last time he scored over 20 is now February in his victory speech for the New Hampshire primary.  He’s sputtered out, narratively.

A CAMPAIGN IN 3 PHASES

It’s pretty clear there are now 3 phases to Trump’s campaign.

Phase One was the Corey Lewandowski Wild West Days.  Trump shot from the hip and simultaneously had strong narrative content to what he delivered.  And they won the primary.

Phase Two is what just ended.  He fired Lewandowski, brought on Paul Manafort, tried to be more Presidential, gave a lot of boring, ineffective speeches, made lots of gaffes and blunders, sagged in the spolls, started using a teleprompter, and among all these other things, ended up giving speeches that all scored well below 20 for the Narrative Index.

Phase Three starts now.  He’s brought on two new people.  One is soiled by the Breitbart name, the other is a frequent guest on MSNBC shows like Hardball.  Manafort has been demoted.  These two are known to be in alignment with Trump’s voice.

It will be interesting to see if his narrative content returns.

And please don’t anyone write to me accusing me of being a Trump fan.  He’s despicable.  But that’s no reason to not study what he’s doing.  Unless you’re a typical Democrat and prefer to just ridicule him.