For his inauguration, Donald Trump fired off a narrative missile, almost certainly crafted by his Chief Strategist, Dr. Evil (Steve Bannon). It’s a harbinger of things to come. Get ready, it’s gonna get ugly… -er. 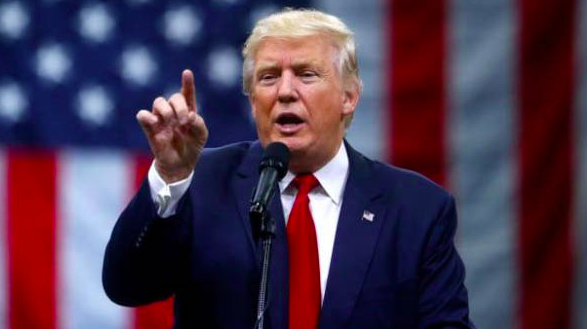 SHORT, NOT SWEET, AND STRUCTURED.

Okay, Trump sucks and is a horrible person and all that stuff. There, that’s my disclaimer so that hopefully no one calls me a Trump lover. I’m not. But I do demand the right to analyze the narrative elements of his communication and call them “good” without having that mean I support his policies. I don’t.

The political pundits, who are deaf and blind to the entire concept of narrative structure, thought Trump’s inauguration speech was short, dark and weird.

It was powerfully structured in terms of narrative. As I have been saying for two years now, Trump has deep narrative intuition. This is just the start. He is going to give mean, angry, powerfully focused speeches for a long time to come. It’s what he thrives on. He will never, ever be content with a lack of tension. Never. It’s what narrative demands.

Here are, in my opinion, the 5 most important narrative features of Trump’s inauguration speech:

1) OVERARCHING ABT – THE “WE SHALL EMERGE FROM THE DARKNESS” THEME

Obama gave a solid first inauguration speech for which you could say the key word of “hardship” was at it’s core. It was justified then given the collapsing economy he inherited. Trump is getting a booming economy, yet he delivered the same sort of message. His ABT was basically, “We are in a dark time BUT I am now President, THEREFORE we are going to return to good times AGAIN.” Make a note of that last word.

He will always be working to generate narrative tension. That is the main driver of all his actions. Even if there were ever peace, he would find a source of tension. The man will never, ever be comfortable for one moment if there is no tension. Everyone should accept this core property of his psyche. It explains more of his behavior than anything else. It’s why, rather than be a good sport with the SNL parodies of him, he instead takes issue with it. Being a good sport destroys narrative tension. That’s just not him.

I had predicted last week that by looking at the Narrative Index of the speech (the BUT/AND ratio) you would be able to infer whether Trump’s schlub speechwriter Stephen Miller (author of his speeches last summer that mostly scored around 10) wrote it, versus Trump (who averaged 29 last spring when he was writing his own speeches that got him the candidacy).

In the end it was probably neither. The inside sources say it was his agent of darkness — his “strategist” — Steve Bannon. Which makes sense. It ended up being a compromise between the styles of Trump and Miller, and thus had the intermediate score of 18.

In classic ABT form he opened with words of agreement. He spoke the platitudes of how power is transferred every four years and thanked the Obamas. But then … he inserted a singular statement of contradiction with this passage:

There’s actually two words of contradiction — however and but. A double dose, fitting of what was to come. He identified the problem (the elites have had all the power), then launched right into the statement of consequence:

That all changes starting right here and right now because this moment is your moment, it belongs to you.

4) THE JOURNEY: ARISTOTLE WOULD HAVE BEEN IMPRESSED

From there, Trump/Bannon embarked on a series of narrative cycles — all ABT structured — all matching Aristotle’s cycles of paridos, episode and stasimon which you can see in Figure 5 of “Houston, We Have a Narrative.” Over and over until climaxing in this passage shortly before the end:

Finally, we must think big and dream even bigger. In America, we understand that a nation is only living as long as it is striving. We will no longer accept politicians who are all talk and no action, constantly complaining, but never doing anything about it.
(APPLAUSE)
The time for empty talk is over. Now arrives the hour of action.

What is most stunning is the grand synthesis of everything — his last 100 words. SIX of those last 100 words were the word “again.” That is very, very significant. When you study the monomyth of Joseph Campbell you come to realize that once the journey has begun — once you have entered the “special world” — your only overall goal is just to get back to the “ordinary world” … AGAIN.

That word is deeply powerful in narrative terms. And guess where it’s shown up for the past two years — as the last word of his slogan, “Make America Great Again.”

That is how deep Donald Trump’s narrative intuition is.

BOTTOM LINE: THE SPEECH WAS NOT FOR ELITES OR EGGHEADS

Sorry. It’s the truth. If you are smart enough to pick the speech apart analytically then it simply wasn’t meant for you. Trump has deep narrative intuition. He knows how to use it to connect with the masses. No one — not one person — in the Democratic party has this attribute. It’s not just about being a populist hate monger. He embodies the “narrative imperative” of the American masses, and they will be listening to him for a long time to come.