If Michael Crichton were alive today he would look at the news of President Trump and just say one thing, “Yep, figures.” His 1999 AAAS keynote address was titled, “Ritual Abuse, Hot Air, and Missed Opportunities.” Among many things, he was offering up advice on how to deal with fake news. He tried. No one listened. 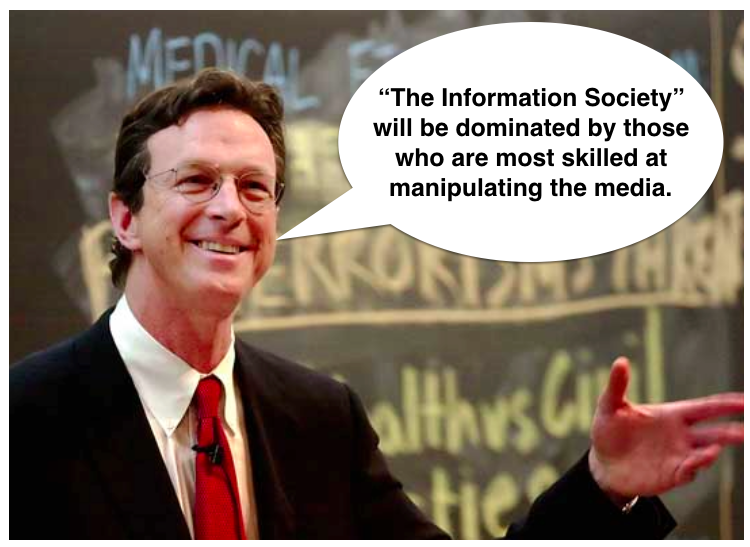 Michael Crichton gave a speech filled with practical advice for the science world. This is a line from his speech. Which fell on deaf ears.

WHAT ARE SPEECHES FOR, WHEN NO ONE LISTENS ANY MORE?

That’s a paraphrasing of “Words,” the old 1980’s song from Missing Persons. And is what Michael Crichton must have felt in response to his 1999 keynote address to the AAAS meeting titled, “Ritual Abuse, Hot Air, and Missed Opportunities.”

The title referred to “ritual abuse” meaning the anger of the science world in feeling misunderstood, “hot air” the fact that most media is just that (so what), and “missed opportunities” — that it really isn’t that hard to use of the media, you just need to do it.

Michael Crichton was a giant of a man, not just physically (at 6’10”) but intellectually. He was a smart guy who left a burgeoning career in medicine to become a bestselling science fiction writer, reaching a peak with his landmark novel, “Jurassic Park.”

Over the years he kept in touch with the science world and by the late 1990’s had plenty of smart things to say given that no one in science had his understanding of mass media. He offered up his wisdom in 1999 as the keynote speaker at the annual meeting of AAAS.  He ended his talk by listing 4 problems and their possible solutions.

He started the last bit of the talk saying, “If I were magically put in charge of improving the status and image of science, I’d start by using the media, instead of feeling victimized by them.”

Look at the quote above in the photo. He knew what was coming. He could have predicted that one day the Presidency would be won by a master media manipulator. He tried to instruct the science world on how the system works. But scientists don’t listen.

Here’s his specific itemization of major media/image problems faced by science and how to deal with them. Just about none of this was heeded.

PROBLEM 1: FEELING “USED” BY THE MEDIA
SOLUTION:  Instead of fighting and resisting reporters, work with them. The AAAS Mass Media Fellows program has been somewhat of an effort in this direction, but still is only a program for training reporters. It’s not the sort of real world/public relations firm style involvement with shaping media that he was talking about. Scientists are too terrified of media to ever do that.

PROBLEM 2: INACCURACY
SOLUTION:  Set up a service bureau for reporters. One genuine stride in this direction has been the National Academy of Sciences Science and Entertainment Exchange program in Hollywood which has provided a service to writers to help them with the scientific accuracy of their scripts. And even better, and pre-dating them, is the Hollywood Health and Society project of the USC Annenberg School of Communication. But still, both projects are sort of “passive” media manipulation — offering up help, but not actively going after stories to set them straight.

PROBLEM 3: FAKE NEWS
SOLUTION:  Establish a “GOOD HOUSEKEEPING SEAL” for reporters so that your denial has power. This was never even close to being addressed. It should have been. In 2005 John Ioannidis offered up his false positives problem for the biomedical world, and by 2010 David H. Freedman had published his powerful book, “Wrong: Why Experts Keep Failing Us …”  Crichton’s solution was basically to use the power of branding — to establish a trusted and reliable brand for science, such as exists for the CDC.  But nobody was close to thinking in these terms.

PROBLEM 4: FAKE EXPERTS
SOLUTION:  RECOGNIZABLE SPOKESPERSONS – science needs to anoint designated experts, respect them, then use them to put a human face on science. This was such good advice. I bet the person he was thinking of was Surgeon General C. Everett Koop — the only Surgeon General to attain rock star/badass status. The Associated Press said, “Koop was the only surgeon general to become a household name.” He kicked ass on tobacco and AIDS under a Republican President, Reagan. I once stood next to him at the urinals at Boston’s Logan Airport and wanted to shake his hand but obviously was the wrong time. He was awesome, with his bow tie and Amish beard. He stood up to the tobacco industry and created exactly what Crichton proposed — a trusted, reliable voice of knowledge and authority endorsed by the science community. Similar things can be said for Carl Sagan. But that’s about it. Since then it’s been a string of dull, faceless scientists trying to interact with the media, eventually devolving into Bill Nye the Science Clown. Oh, well. Neil Degrasse Tyson does come close to Crichton’s vision, but he’s not officially sanctioned by the science world.

Tragic, really. The bungling ineptitude of the science community and the pro-science Democratic party eventually ends up with the obvious result — President Trump. As the Science March folks prepare for what will hopefully be a huge turnout on April 22, they should keep in mind that the most media-savvy science proponent in history, Michael Crichton, did once upon a time offer up the advice that was needed, but nobody listened.

It’s the bane of scientists. They don’t listen.