It’s the old Adlai Stevenson line from his 1952 Presidential candidacy.  A woman shouted to him, “All the thinking people are with you.”  He replied, “I’m afraid that won’t do — I need a majority.”  A tour operator in Australia says he’d like to think “most people” would like to know the truth about the decline of the Great Barrier Reef.  I’m afraid my experiences with the Florida Keys and elsewhere goes against that.  As our President would say, “Sad!” 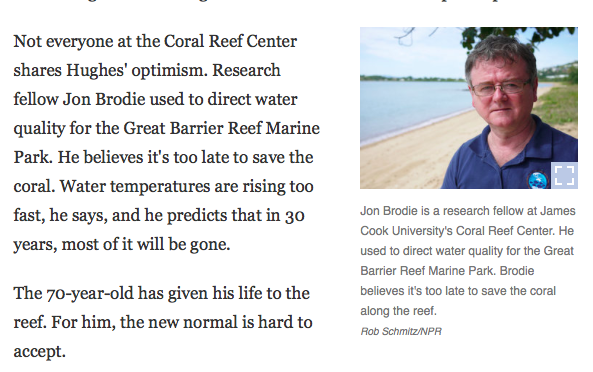 NOT JON BRODIE.  Sorry, NPR, you might want to get your photo ID’s straight.  This is Terry Hughes.

GIVE ‘EM WHAT THEY WANT

Here’s yet another tragic article about the staggering levels of climate-induced coral death on Australia’s Great Barrier Reef.  The news rips at my heart given the number of years I spent studying the reef back when coral bleaching was just a curiosity almost never seen on a broad scale.  Those days are long gone.
In this article a tourism operator offers this final, sadly idealistic comment:  “If you’ve got a fantastic product, but there’s a negative aspect of it, how do you deal with that negative aspect?” Edmondson asks. “It’s best, I think, to explain it because most people are understanding.”
Sorry.  “Most people” actually aren’t understanding.  I’m afraid any publicist worth their salt would say, “DON’T SAY A WORD ABOUT THE NEGATIVE ASPECT!!!”

I saw this principle up close and personal in 2005 when a group in Florida brought me in to possibly run a “shifting baselines” campaign for the Florida Keys.  The idea would have been a public relations effort in which we would try to instruct the public on how beautiful the coral reefs of the Keys used to be, how impoverished they are today, and how we need their help to get them back to the old days (the baseline conditions).
I spent a week driving up and down the Keys talking to everyone on both sides of the conservation dynamic.  What I learned was that the Tourism Development Council (TDC) of the Florida Keys had a $10 million budget to produce brochures and TV commercials showing the most beautiful, healthy and colorful images of coral reefs … even if the materials had to come from the Bahamas or back in the 1960’s (because you can’t see those sights in the Keys today).
Literally.  That’s what one of the TDC commissioners confided to me.  He also said, “You’re not planning to show ‘the old black and whites’ are you?”
What he meant was the old black and white trophy photos of the 1920’s showing massive game fish on the docks of sizes that have not been seen in the area for decades.  He assured me they would run me out of town if I did.  (Loren McClenachan published this great example of the problem)
I left there telling my hosts who had invited me that unless they had a comparable budget (which they didn’t — their budget wouldn’t have been even one percent of TDC) it was hopeless.  It’s nice to dream of viral videos and communications miracles, but the truth is you mostly get what you pay for in communication (which is the biggest reason why science, being such cheapstakes with communications budgets, sucks at communication).

Combine that with what we heard in 2002 at our Round Table Evening in Santa Monica for Shifting Baselines.  We had two underwater cinematographers who talked about sending in their coral reef documentaries to Discovery Channel and National Geographic and having the producers chop off their part at the end where they show dead coral reefs and kvetch about the declining state of reefs.
Nobody wants to watch dead coral reefs on TV.  Actually, a few very smart people do — but they’re the same ones that Stevenson said aren’t enough of a resource to win with.  It’s a huge, sad dilemma.
Disneyland and Superheroes win in the end.  And as Bill Maher pointed out earlier this year in a brilliant monologue, when you have a nation that’s addicted to the fantasy nonsense of super heroes, you end up with a President like the one we now have.
And yet, the situation is not hopeless, it just needs greater focus on communication and marketing than the science and environmental worlds are willing to give.  And more importantly, it needs a deeper understanding by all of the eternal power of narrative.  End of story.