It’s here, it’s there, it’s everywhere you look. Like this article in this month’s issue of The Atlantic. As Aaron Huertas says, it’s like the arrow in the Fedex logo — once you see it, you can’t unsee it. 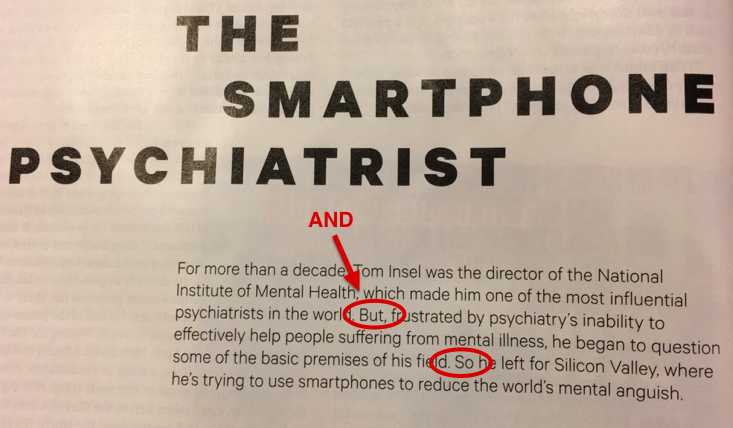 ABTsville. Plain and simple — two opening clauses which could be connected with an “AND” (though would sound clunky), then the BUT, and SO which conveys the same force of consequence as THEREFORE.

YES, IT IS THAT SIMPLE AND COMMON

I continue to wage war against all the old farts who say “it’s not that simple.” Yes it is.

We’re definitely making progress. We’ve now run or are running 26 Story Circles. Yesterday we had an “ABT Build Session” with about 20 USDA veterans of Story Circles. It was 90 minutes of discussing and editing about 10 ABTs of the participants. It’s a standard aspect of Story Circles training which is both interesting and productive for everyone involved.

And then this morning I open this month’s issue of The Atlantic and there it is, plain as day — the ABT in the form of the little teaser at the start of an article about a psychiatrist written by David Dobbs who obviously has good narrative intuition.

It’s everywhere you find good communication. Yes, it is that simple.