The sad news: Most of the world and life in general is not that great of a story. In fact, most of it isn’t even a story. It takes A LOT of hard work to either craft a great story or find one. Don’t underestimate how tough the challenge is. 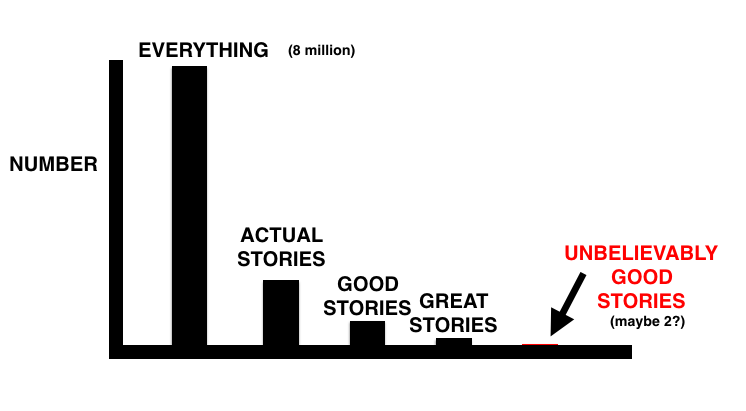 THERE’S ACTUALLY ONLY A COUPLE INCREDIBLE STORIES IN THE NAKED CITY.

THE NAKED (AND MOSTLY BORING) CITY

When I was a kid (a looooong time ago) there was a show called, “The Naked City,” which opened with a wide shot of New York City and the narrator saying, “There’s eight million stories in the Naked City, this is one of them.” The eight million referred to the population size of NYC at the time, suggesting that, “Everyone is an interesting story, just waiting to be told.”

Nope. Sorry. The truth is most people don’t have a story to tell. If you doubt this, try going to film school and being forced to see it played out in all your classes where students are forced to make films, even though they have nothing to say. It’s like being called on in a conversation by someone saying, “What do you think?,” and replying, “Blaaaaaah, buh, blaaaaaaah, bluhbluh.” Just because you made a noise didn’t mean you said something.

In fact, one rather heartless friend used to say, “Just because it happened to YOU, doesn’t necessarily mean it’s interesting.”

At USC they were smart enough to have all 50 students in each class pitch their story ideas on a single day, then the faculty chose four — literally the cream of the crop for each cohort — to actually be given the funds to make their films. I sat through five semesters of those pitches.

The proportions pretty much followed the subjective graph above. Most of the pitches didn’t have a story to tell. Kinda like, “I’m gonna make a film about this guy, and he breaks up with his girlfriend, and he goes to Arkansas, and he gets a job cutting trees, and he’s making some money, and he tells his friends he’s not sure that’s what he wants to do with his life, and he sits out at night looking at the moon, and he gets depressed, and he keeps chopping trees, and finds a new job at a restaurant, and he …” Not a story, dude.

Actually, I just remembered this — here’s a terrible story. One young guy the semester after me was a real quiet introvert who was a Dungeons and Dragons type of kid. He pitched a sic-fi “story,” where he started telling what his film would be about.

It was like he was in a trance explaining it to the audience, with his eyes glazed over, looking far away, spewing out all this terminology he had come up with, saying, “So the Zorgons on planet Skartan go into battle with the Keerjops and they’ve got these special Shootoo rods that can put their enemy into the ninth dimension, but their leader Dalius doesn’t think they should use them while his son Varlin does, and every time they visit the planet Gnipgnop …”

For fifteen minutes he wound out this bizarrely intricate yet utterly confusing “story” of the film he wanted to make which you could see he stayed up late every night laying in bed staring at the ceiling figuring it out. He was completely off in his own bonkers world. By the end of it people were avoiding eye contact with each other out of awkward embarrassment for him. Needless to say, he didn’t get chosen. BUT …

The next day the Chairman of the department asked him to stop by for a chat. The kid showed up thinking he might be offered support for his film from a different department. Instead, the Chairman gave him a number to call. It was the mental health services program on the campus. Seriously, his pitch was that much in outer space it was a reasonable suggestion.

You want to be good with story, it starts with developing a strong feel for what is not a story. Having a good story takes a lot of work. And I mean A LOT. We see it now with our Story Circles Narrative Training. They’re seeing it every week with the 6 circles that are running with National Park Service in Colorado.

Every week one member of each group offers up their narrative of a project to work on. Most of them start their session thinking “what I’m sharing here is pretty good.” By the end they’re left thinking, “Wow. I’ve got a lot of work to do.”

Here’s a way to look at it. Imagine you take the Sunday crossword puzzle from the LA Times, work on it for ten minutes, solve about ten out of a hundred clues, then proudly show it to your friends, saying, “Hey, look at my solution to the crossword puzzle.”

They would look at it, look at you, then say, “Um, yeah, nice start, get to work.” That’s exactly what you’re getting with most films — their final version is like that puzzle that’s only started to be solved.

Look at my breakdown of the HBO Real Sports segment on the Great Barrier Reef a couple weeks ago and you’re looking at essentially the description of a completed crossword puzzle. They have a whole team of story folks who make sure it is well polished. But then you look at most amateur documentaries on the same subject and you’re looking at that version of a puzzle with ten out of a hundred clues completed.

One of my film school classmates worked for Real Sports for a couple years. He told me about it. They work HARD, scouring the landscape for possible stories. They don’t say, “This month we’re going to do a segment on football, a segment on boxing, a segment on car racing and a segment on skiing.”

That is a recipe for bad storytelling — saying, “We don’t care if there’s no good stories for each topic, we’ll find some bunch of stuff on the subject and present it.”

No, they scour the world for stories, eventually taking the handful on the end of the graph above — the “good stories” — then working to present them as tightly and cleanly as possible. Every once in a while they strike pure gold as they did with the Rod Carew heart story in that same episode as the reef.

Storytelling, when it works, is indeed magic. But that’s incredibly rare.

The fact that “most movies are bad” is a reflection of how tough it is. A few years ago a friend and I were watching the Oscars in our separate homes, texting between speeches and following a Twitter feed for it. A presenter said, “Movies are magic!” Someone tweeted immediately in response, “Bacon is magic, movies are crap.”