“Reductionist and insulting,” “hyper-reductionist,” and “simpleton” are a few of the more common slurs you get when you advocate simplicity. But the mud slinging is worth it when you look into the eyes of 40 USDA scientists working with the ABT Narrative Template and see a moment of revelation as I did last Thursday in San Francisco at one of our Story Circles Narrative Training Demo Days. Kinda makes you wanna tell the narrative purists to get stuffed. 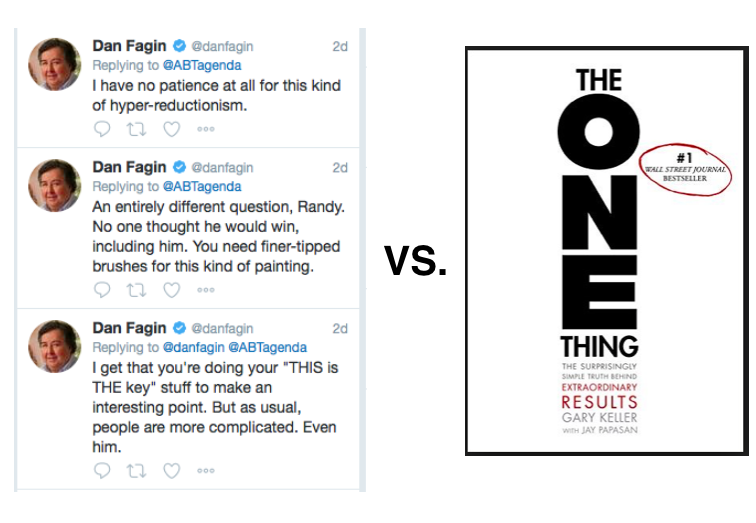 Last Tuesday my “buddy” Dan Fagin, long time professor of journalism at N.Y.U. who hosted me in 2014, tweeted some interesting comments my way — above are a few of them. The tone is condescending, the “hyper-reductionism” label is insulting.

Dan wrote a truly great book, “Tom’s River” that earned a Pulitzer Prize in 2014. I was one of many who applauded heartily. But I also agree with the Amazon reviewer who conveyed the essence of the book in saying, ” I appreciate how thorough it is but just beware that it’s meant for science-minded people who want the FULL story…plus the full story of the side stories.”

Yes. Dan’s an expert on telling the full story, and the world definitely needs such skills. But we had a Presidential candidate last year who tried endlessly to tell her full story, resulting in telling no story, and ultimately had her opponent tell her story with two words, “Crooked Hillary,” that she will take to her grave.

So don’t tell me about the need for subtlety and nuance in today’s world. Our nation is now getting ravaged by the consequences of thinking the masses have the time to hear full stories. They don’t.