Hey, I was just talking with Jayde AND we were wrapping things up, BUT then she said “So, call me maybe,” THEREFORE we now have our first entry into the ABT Hall of Fame. #seriously #drinkthekoolaidnow 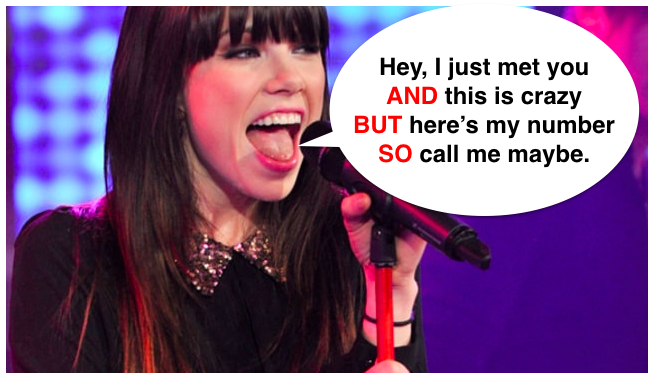 I KNEW THERE WAS SOMETHING BRILLIANT ABOUT THIS SONG. Carly Rae Jepsen’s 2012 mega-hit “Call Me Maybe” is the simplest ABT ever.

WHAT MORE PROOF DO YOU NEED?

I’ve been saying it for 5 years now. The ABT is universal. Won’t someone please argue with me about this? Won’t somebody say, “No, you’re wrong, here’s an alternative, competing model for a universal narrative template.”

Maybe the ABT really is THE fundamental narrative tool that underpins pretty much everything. In his Masterclass, veteran screenwriter David Mamet says, “Everything is drama.” Which is true, except that I would broaden that to say “everything (interesting) is narrative, and thus ABT.”

Regardless, what more of a scholarly endorsement of the ABT is needed than Professor Carly Rae Jepsen using it?