Bill Maher ends every episode of his HBO show Real Time with a monologue that begins with the last of his New Rules. Month after month, year after year, the monologues are powerfully written essays. Wanna know why? Just look at the Narrative Index. I measured it for 53 of them — the average is 33. Last week’s was a 43. That’s strong narrative content. If only they had written Hillary Clinton’s speeches. Seriously. 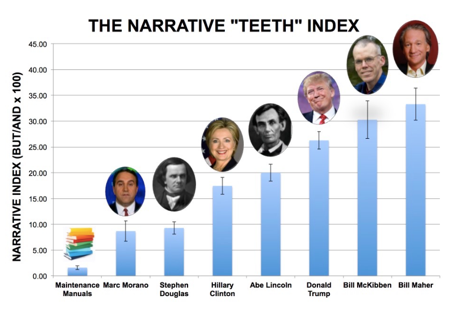 BILL MAHER’S WRITERS HAVE TEETH. His monologues have consistently strong narrative structure as reflected by the Narrative index. His values come from 52 monologues. McKibben is from four speeches, Trump is 11 debate performances, Lincoln is his 7 debates with Douglas in 1858, Hillary Clinton is 9 debate performances, Douglas is his 7 debates with Lincoln, climate skeptic Marc Morano is from 9 television appearances, and the left-most value is the average of 4 equipment maintenance manuals found on the internet.

Wanna know why Donald Trump hates Bill Maher? It’s not just because Bill suggested he was descended from an orangutan. It’s also because Bill communicates with strong narrative content, as revealed by the Narrative Index.

It’s a metric so simple that it’s beneath the dignity of serious text analysis jockeys, but it’s also very profound in what it reveals. It’s just the ratio of all the BUTs to ANDs in a given text. I derived it from the ABT which arose from the Rule of Replacing I learned from the South Park creators.

I’ve been measuring the Narrative Index for hundreds of texts over the past two years. The patterns are astounding. In the graph above you see a range of values. At one end are equipment maintenance manuals. Not surprisingly, they hardly ever present narrative content. Telephone books would score even lower.

At the other end are Bill Maher’s monologues. For a while HBO provided the transcripts on their websites. I analyzed 52 of them. Also, just to show you in detail how the pattern works, below is the transcript of last Friday night’s monologue with all the BUTs and ANDs colored.

POLITICIANS NEED COMEDY WRITERS (BUT NOT FOR JOKES)

You have to be careful analyzing small sample sizes. I usually recommend at least 1,000 words. This one is only 566 so you wouldn’t want to infer too much. But when you average it across 52 of his other monologues you can rest assured the pattern is real.

The fact is he’s got a great team of writers, and what they produce is always punchy. It has to be. It’s for television — the medium that produced our current President — a man who has a dangerously deep grasp of narrative.

This is what I’ve been saying for years — that politicians need comic writers as their speech writers. Not for their ability to write humor. They need them because they, perhaps better than anyone, understand narrative structure. They have to, or else they’ll bomb.

AND finally … if you want to understand why america is so divided, don’t talk about Republicans AND Democrats, or red states AND blue states, read the story about The City Mouse AND the Country Mouse, currently being sold under the new title, What Happened? BUT the original is about two mice who learn that you’re either one or the other, city or country. AND the same really could be said for America. When you fly over it, you don’t see red states AND blue states. You see vast stretches of land where there’s nothing. AND then every once in a while, a city.

Here’s Missouri, BUT every state looks the same — a sea of red with a few blue dots. Now I could joke about Alabama all I want — AND believe me, I want — it’s Trump country. BUT not Birmingham, cause that’s a city — it voted for Hillary. Something happens to you when you live in a city — you get mugged.

BUT you also have a multi-cultural experience. Cities are places with diversity AND theaters AND museums, AND other gay stuff. I have nothing against rural life, BUT I’ve seen farms on TV AND they look dusty. Republicans are freaking out lately because it seems Trump is pivoting from these two, to these two. Colluding with Russia — fine. BUT Democrats?

BUT really it’s not that complicated. Chuck Schumer AND Nancy Pelosi? They’re city mice. AND that’s who a consummate New Yorker like Donald Trump relates to. Why is he always poop-Tweeting at 3 a.m.? Because he’s from the city that never sleeps. He’s such a New York guy, he had is last wife delivered. Trump’s disillusion with McConnell AND Ryan is not really political — it’s just that for the first seventy years of his life he would never be caught dead hanging around with traveling bible salesman like Paul Ryan or a corny countrified goober like Mitch McConnell.

For Christ sakes, the man is from Kentucky. Jeff Sessions is from Alabama. When he talks all Trump hears is a tiny little Ernest movie. AND Mike Pence? It must be torture for Trump to be in the White House every day with that home spun Christian tightly wound human hard on. He literally won’t dine with an unchaperoned woman. Meanwhile Trump has spent his entire life posing with a shit-eating grin that says look at all the pussy I’m getting.

AND this is the existential crisis of our President. He’s an asshole, BUT he’s not a hick. He represents one group, BUT belongs to another. I hate to break it to you real Americans, BUT what Trump likes about Chuck AND Nancy is they’re not you.

He’s not one of you — trust me — when Trump watches “The Beverly Hillbillies,” he’s rooting for Mr. Drysdale. AND when he tells a crowd — as he often does, “I love you,” what he means is that in middle America, he found something that he had long ago run out of in New York — suckers.

Trump voters were played for rubes by the ultimate fast talking city slicker who saw vulnerable people nervous about jobs AND the melting pot getting too melty, AND he told them he’d built a great wall AND get their jobs back at the mine, AND they said where do I sign.