I dreamed of it at the end of, “Houston, We Have A Narrative.” Now they’ve done it.  Last year the good folks at the National Park Service in Fort Collins, Colorado (and Lakewood!) launched 6 Story Circles involving 32 scientists and communicators.  All 6 went the distance, with the last one completing their 10th session this week. Along the way they established a new tradition — the ABT Cake (or pie!) to celebrate the 10th session along with the completion certificates (important in a government agency). Of course, the training is not finished.  It never is.  Story Circles just orients you with the tools and mindset to start seeing narrative structure better and thinking more deeply about it. This is now a nucleus of 32 people who can speak the ABT Framework among themselves as they shape the narrative structure of all their projects and communication.  It’s a major accomplishment, with huge thanks to Larry Perez, the Communications Coordinator who masterminded the entire effort from start to finish. 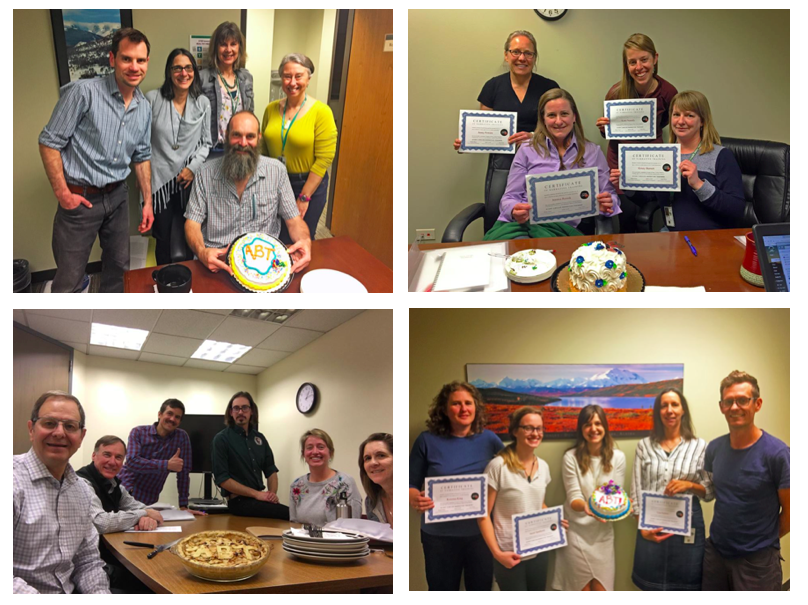 THREE CAKES AND A PIE.  These are 4 of the 6 circles, celebrating their 10th and final session with ABT cakes and an ABT pie.

THIS IS MY DREAM

Here is it, in living color.  I started the last chapter of, “Houston, We Have A Narrative” in 2015 talking about the idea of what I termed, “Narrative Culture.”  It’s the concept of a group of co-workers being versed in the ABT Framework and the narrative tools we introduce in Story Circles.  If they all speak this common language of narrative structure, and have practiced the idea of working on someones narrative as a group, using the narrative tools, that they can begin to not only work together, but also set standards where they can spot AAA and DHY problems and work to reduce them.

Here’s what I said about it:

Having a narrative culture within an organization or university department or research institution could mean you have reached a critical threshold of people who have undergone narrative training, have developed the basics of narrative intuition, and now the norms have shifted. They know the narrative templates. They speak with a shared narrative vocabulary.

And there is now a certain level of expectation of narrative clarity and cohesion.  It’s not a lot to learn, there’s just a need to learn it well.

Here’s what Story Circles Narrative Training provides, and why it’s so valuable:

1 THE TOOLS – introduces the participants to the ABT, the Dobzhansky Template, the Story Cycle and the Log Line Maker

3 SOCIAL ENTRAINMENT –  it gets everyone in the habit of developing narrative structure as a group, which is essential

With many of the participants there’s a feeling of “That was great — what’s next?”   We’ve gotten that with other circles.  The Fort Collins USGS circle that took part in our AAAS video told about how they wanted to keep meeting after the ten sessions were done.

We’ll eventually develop some sort of Story Circles 2.0.  We were talking about it at USDA three years ago from the start.  For now, the main goal is to just get large numbers of people through the training and let them continue to work and talk among themselves. We’re approaching 50 circles, and if you add up all the scientists and communicators who have taken part in the nearly 30 Demo Days, the total number of people involved is well over 1,000.

Slowly, slowly, changing the way people look at communications training.  Getting them to realize, “Narrative is Everything.”

Plain and simple, as laid out in this figure on page 220 of “Houston, We Have A Narrative.” 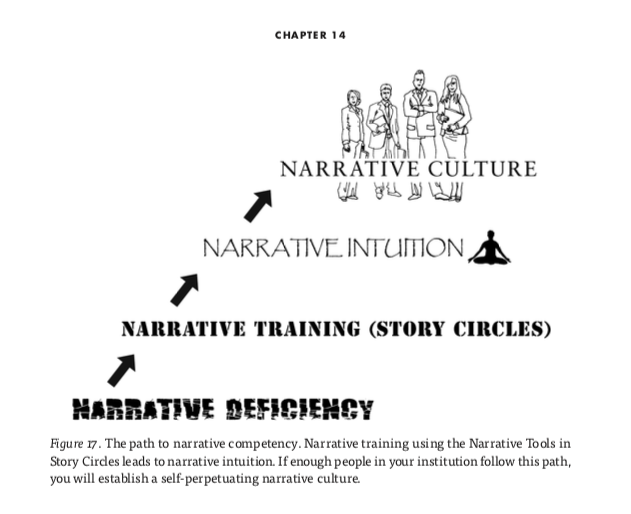