Story Circles Narrative Training is a totally new form of communication training.  It comes from my experiences in filmmaking, acting classes, and science.  We’ve been running it for 3.5 years.  We’ll complete our 50th Story Circle by the end of the year.  There’s lots of great things that come from Story Circles (many of which are mentioned in the recent video with the Colorado National Park Service participants), but here’s what I think are the 5 most important major benefits of the 10 one hour Story Circles sessions. 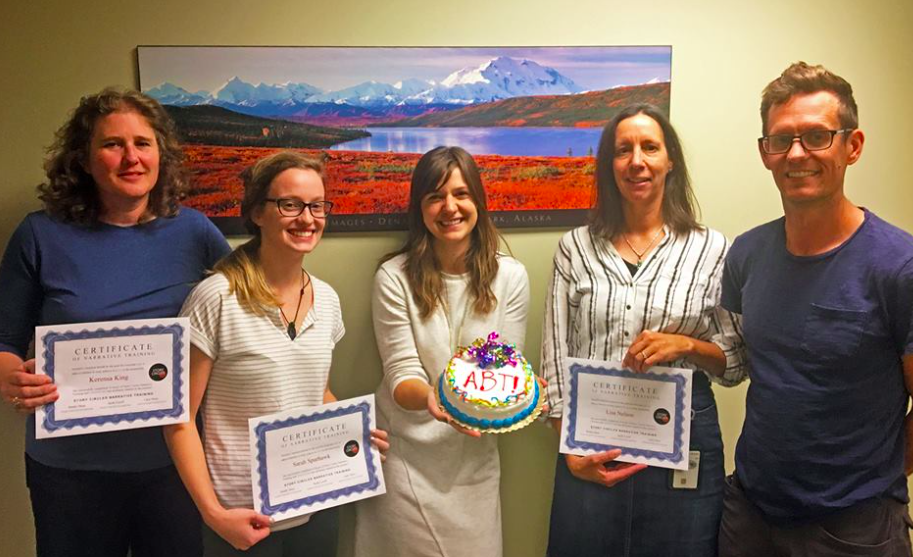 * – Service Provider Warning:  ABT cake must be conceived, designed, funded, baked, iced, decorated and consumed by participants.  Selfie and candles not included.

There is no other communications training program similar to Story Circles.  It is built upon original narrative tools with an original structure to the sessions.

Lots of great things come from the training — not the least of which is fun — but here’s the five most substantive, work-related benefits that have become evident over the course of running 40 Story Circles.

During the 10 one hour sessions of Story Circles you learn to use the four main narrative tools, three of which are new and introduced in the books, “Connection” (2013) and “Houston, We Have A Narrative” (2015).  The templates for the WORD (Dobzhansky Template) and SENTENCE (ABT) are not just simpler than the larger templates, they’re more analytical/reductionist.  As a result, scientists — who tend to be analytical by nature — are immediately comfortable with these two simple tools and draw satisfaction from how quickly they provide insights into narrative structure.  But this tends to change with the sessions.

More elusive and even frustrating are the two PARAGRAPH templates (Logline Maker, Story Cycle).  They are more holistic, less analytical, and require at least some narrative intuition to use effectively.  What this causes is frustration initially.  Over and over again we hear back from circles that they’re having trouble with the paragraph templates.  And yet, when the 10 sessions are done, most participants report that by the end they were starting to get the feel of the larger templates and finding them more intriguing and rewarding.  It’s a great transition to observe.

This is the ultimate goal of Story Circles, which is not INTELLECTUAL.  If Story Circles was an intellectual exercise, it would require only one session — to introduce the tools.  That would be enough to stimulate your intellect and you’d feel satisfied.

In fact, this is the problem we’ve run into with a lot of students.  They tend to be oriented more towards developing their intellectual side, which means they are seeking novelty and new material.  And that’s what you get in most college courses that have a syllabus which presents new topics every week.  BUT … that’s not what we do.

Story Circles is about building INTUITION.  This requires repetition — just like going to the gym and lifting weights, as we’re constantly saying.  This is what begins to develop as you work with the tools, week after week — not just getting to know them, but developing an intuitive feel for how they work and what they are good for.

Mike Strauss, who is a co-developer of Story Circles, tells about a study they did at USDA when he was head of their Office of Science Quality Review.  To figure out the source of problems with poorly written project plans they required investigators to answer 10 questions.  One of them was, “How many people, other than yourself, have read this project plan before you submitted it?”  Nearly a third answered, “zero.”  That’s a problem.

It’s almost impossible to do a good job shaping the narrative structure of anything if you don’t share your thoughts with other human beings.  You can’t expect to sit alone in a laboratory, writing by yourself, and come up with something that will flow smoothy and have solid logic when other people hear it.  And yet the world of science tends to allow for plenty of isolation where this occurs.

Just about everything to do with Story Circles involves groups.  The Demo Day is upwards of 40 people, individual circles are 5 people.  The net result is “entrainment” — a conditioning of you so that you eventually just don’t even feel right submitting a document or giving a presentation unless you’ve managed to take at least a little bit of time to seek the help of colleagues in “shaping the narrative.”

This is not about stomping out individuality, but rather about strengthening your ability to present material that will both retain your individuality while also “working” for everyone who needs to understand and support it.

Long ago I spent two years helping run an AIDS support group.  Participants would talk about “processing” — the need to find the time to make sense of events.  They would talk about their anxiety, and often there would be mention of the basic fact that “you can’t rush the river.”  What that means is that there are things in life that just can’t be hurried.  Grieving is one of them.  Development of narrative structure is another.  You begin to learn this with Story Circles.

One of my favorite moments was talking last year at Genentech with the participants in a Story Circle that took nearly a year to complete.  Their schedules are insanely busy, so it was hard to get everyone together consistently.  They ended up postponing sessions, week after week.   I asked if they thought the training would work easier if we compressed it down to 3 weeks with 3-4 sessions per week.  They recoiled, immediately saying, “No way!”

They felt it was very, very important to have at least a week gap between sessions so you can process what you’re learning.

Think about what this means.  There’s no lectures in Story Circles.  The week in between sessions isn’t about absorbing what’s been barked at you in an hour lecture.  It’s about continuing to mostly think about this single narrative tool, the ABT — to spot in your own world — and to slowly, gradually develop the intuitive feel for what’s boring and confusing versus interesting.

5)  STRUCTURE (THE MAGIC OF THE CUEING VIDEO)

I think this has been the most unforeseen benefit of Story Circles.  We created the hour-long cueing video that structures every session without thinking about all the benefits it would produce.  Here’s a few of them:

A)  PUNCTUALITY –  every session goes for ONLY 60 minutes — never longer — it can’t, the video can’t be stopped.  You never get people showing up at their next meeting complaining that “our Story Circles session ran overtime.”

B)  NO PERSONALITY DYNAMICS –  this is the big one.  If you put 5 people in a room and tell them just to talk for an hour with no clear structure, the interpersonal dynamics will take over.  There will inevitably be one or two quieter people who don’t contribute as much, and one or two more dominant people who will contribute more than their share.  It’s inevitable.

But with the cueing video this can’t happen.  People get cut off, you keep moving on, there isn’t the chance for personality to take over.  The result of this is 40 circles completed without there ever being any complaints about members of a group.  None.  It works like a charm.

C)  LETTING LOOSE OF CONTROL –  This is a great one with heavily academic folks.  Cerebral types are used to “making their point,” no matter how many words and how much time it takes.  But with the cueing video you don’t get to do that.  One of the basic rules is that as soon as the audio cue goes off — ending a 2 to 5 minute segment — you have to move on to the next part.  Whoever is speaking has to stop, mid-sentence — let the thought go, and move on.  There’s an element of improv training to this — just be spontaneous and keep going.  This is essential in communication.

For research science, you need to strive for perfection — measuring things with the greatest accuracy.  But with communication, perfection is the enemy. There’s just too much natural variation for you to somehow think you can get the content perfect.  At some point you have to just give it your best shot and move on.

NARRATIVE IS ABOUT STRUCTURE

This is the bottom line.  What we’re working on with Story Circles isn’t really “storytelling.”  It’s more about narrative structure, which lies at the heart of a story, but what we’re focused on is a more applied form of narrative.  We debated calling the training “Narrative Circles” at the start, but that just didn’t sound as fun.  And fun, in the end, is really important — as evidenced by the ABT cakes.

So what we’re interested in is not creative expression.  Story Circles is more about “strategic communication.”  You’ve got a clear message, and you want to communicate it in a way that will achieve your goals.  Which requires structure.  Which is what Story Circles is all about.  And is why it’s working well for lots of people.