In 1975 Michael Crichton published an elegant short paper pointing to obfuscation as “the problem” for medical communication.  His essay was equally valid for the communication of science in general.  He ended by mentioning that so much important communication ends up as “buried pearls.”   Sadly Crichton’s great little paper ended up itself as a buried pearl. 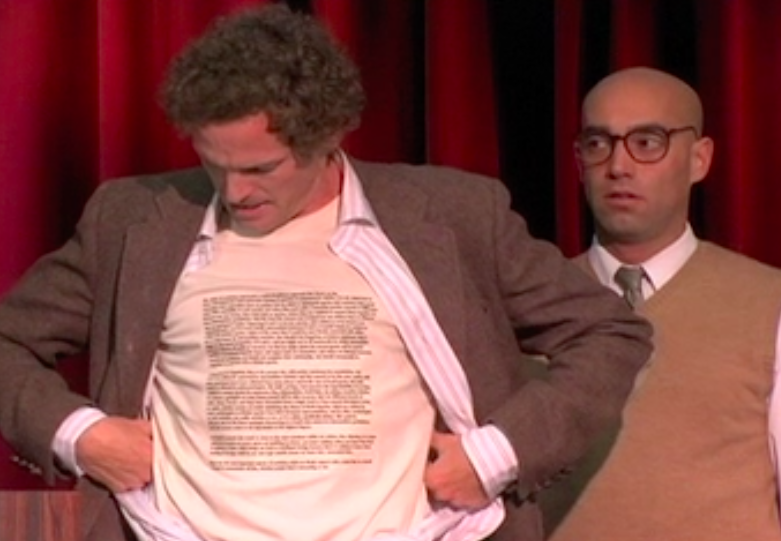 Do evolutionists have a t-shirt with a slogan on it?  Yes we do!

EXASPERATION AND THE MARCH OF OBFUSCATION

What happened?   How was it that the core problem of science communication was so clearly identified and articulated in 1975, but then quickly lost to the dustbin of non-citation?

I invite you to read this simple, elegant paper by techno-thriller author and eventual Hollywood giant Michael Crichton, written in his last months in the academic world.  He was a postdoctoral fellow at the Salk Institute, though by then he was more of a creative writer than scientific researcher, which obviously caused him to start asking, “Why are these scientific papers so hard to read?”

It’s a great article.  Why wasn’t I told about it as a graduate student in biology?  Why didn’t I hear about it in the 1980’s as science communication first emerged as a major concern (I remember when NSF first starting requiring 10% of grant proposal budgets go to outreach)?  Why didn’t someone write to me after any of my 3 books on science communication and tell me about it?   Why does Google Scholar show that it has only been cited 83 times over the four decades since its publication?

IT WASN’T ALWAYS THIS BAD

In the discussion of the paper, Crichton points out that, “Only in the twentieth century has obfuscation become widely acceptable.”  That parallels my relating in, “Don’t Be Such A Scientist,” historian of science Naomi Oreskes telling me about how a century ago scientists had to be good with communication in order to even raise the funds needed to do science.

But the twentieth century saw the rise of the science industrial complex which produced a new breed of scientist — nurtured in the laboratory, funded without communication skills, sheltered from the public, and admired for the mysteriousness of scientific knowledge.  Obfuscation became an accepted practice and only continues to get worse.

Meanwhile, the problem of obfuscation continues to be rediscovered in essays like this one from 2015, which at least concedes, “The idea that writing should be clear, concise, and low-jargon isn’t a new one.”

WHEN WILL THEY EVER LEARN?

It’s always fun to have some laughs at the hopelessness of academic communication.  Slate reveled in this presentation of the Ignobel awards where they have a young girl come out on the stage and shout, “Please stop. I’m bored.” repeatedly for anyone who goes on for more than a minute.

For my documentary feature film, “Flock of Dodos,” I staged a comic debate between the world’s slimiest intelligent design proponent and the world’s angriest evolutionist.  It culminated in them revealing their t-shirts emblazoned with their slogans.  The screen grab above shows the evolutionist reading his “slogan.”

Plenty to laugh about, but then we end up with the New York Times handing over 24,000 words and an entire issue of their Sunday magazine titled, “Losing Earth,” for a junior writer to tell a tale of scientific heroism that leaves out the entire element of science communication ineptitude.  The writer, Nathaniel Rich, told of James Hansen and Rafe Pomerance as climate warriors ahead of their times, but what he should have mentioned was the Crichton 1975 paper pointing out what verbose clods scientists were and continue to be when it comes to getting their own message out.  To celebrate scientists back then over their climate efforts is like praising a football team that has excellent offense but no defense.  They weren’t the whole package — that point needs to be kept in mind, Mr. Rich — and that is the real story to be told.

Nothing has changed.  Just two days ago Al Gore (who isn’t a scientist, but emerged in 2006 as the lead spokesperson FOR the climate science community) went on for over TWO HOURS in his climate “training” session in Los Angeles prompting a friend in the audience to text me the following message:

Gore gave a 2+ hour version of his presentation. And the more I think about it, the more I’m surprised that with all of the people surrounding him, all of the production, team, experts, etc, no one has tried to shape his presentation more, or make it less one dimensional….it was literally one hour of slides showing floods, fires, and droughts. Not kidding. I started fidgeting and getting frustrated and thinking WTF??? We’re here because we’re already on board, JEEZ know your audience!!!

In the meanwhile, Crichton pinpointed the problem in 1975 — obfuscation.  The ABT Framework is the solution, and here’s a simple, elegant new presentation of it by Tullio Rossi.