For more than 3 years I’ve been warning of Donald Trump’s communication skills from the perspective of the narrative tools I’ve developed.  He’s still doing the same things. 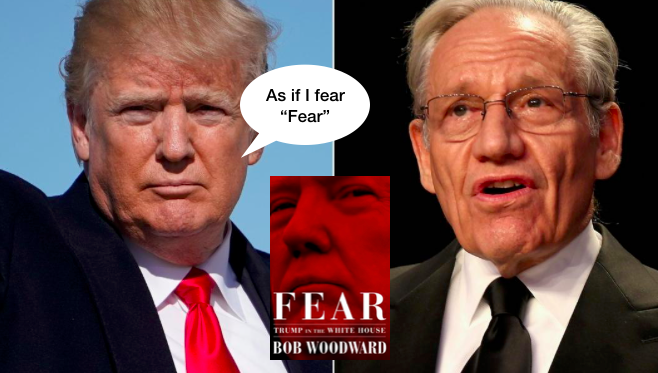 Not your typical politician.  Not really even a politician.  Trump comes, not from the world of politics, but entertainment.  It’s a problem.

Journalists and scientists actually have a lot in common.  Both are obsessed with seeking the truth.  Both are to be admired for feeling considerable social responsibility.  And both do not understand entertainment media.

In a 1999 speech that has become my North Star, scientist-turned-filmmaker Michael Crichton said simply, “Scientists don’t understand media.”  No one would have known better than he, given the depth of his knowledge of the two worlds of science and entertainment.

It’s pretty much true for journalists as well.  They have traditionally been mystified by the madness of Hollywood and mass entertainment.

The most important and prescient quote in that Crichton speech was this, “The Information Society will be dominated by those who are skilled at manipulating the media.”  I can’t imagine a more accurate prediction of the emergence of a figure like Donald Trump — someone more from the entertainment world than the political world — 20 years ago.

A few days after Trump’s victory, CNN posted a list of 24 reasons he won, but the article showed no grasp of the Information Society perspective Crichton understood.  The entire article does not include the words “information” or “communication.”  They missed his central attribute — Trump Knows Narrative.

Media is about narrative.  It doesn’t tolerate material that is low in narrative content.  You can’t hold a press conference to read a telephone book and expect television to cover it.  It’s that simple.  And it means conversely, if you’re good at producing material with strong narrative content, the media will favor you. Comedians know this — if they bore or confuse they will die.

In the summer of 2015, after writing an entire book about narrative (“Houston, We Have A Narrative”) I began to notice how much Trump matched the narrative principles I had presented.   On January 5, 2016 I began my warnings that “Trump Knows Narrative” in detail — shortly after starting this blog.

It was still months before Trump won the nomination.  In that first post I said, “The Democrats had better stop ridiculing him, stop making predictions that he could never win, and start understanding this thing called narrative that he has a mastery of.”  Ten months later, the morning after he won, I was the guest on the podcast, “The Business of Story.”  The title of my episode was, “How Trump’s Narrative Intuition Beat Clinton and Put a Reality TV Actor in the White House.”

Here now is an updated list of the top 5 ways in which you can see how, “Trump Knows Narrative,” continues to be true.  With each point I offer up my recommendation to the Democrats and their current candidates.

Here’s where it starts, and part of why I began my warnings about him in 2015.  He came out of the gates with a slogan (“Make America Great Again”) that was straight out of my ABT Framework and the ABT (And, But, Therefore narrative template).

Our country was once a great AND mighty nation, BUT we’ve slipped in the world, THEREFORE it’s time to Make America Great Again.

Democrats, lacking narrative intuition (as evidenced by their backing a candidate who had no clear narrative), could not see the power of that slogan — they could only think to ridicule it.  And that is still about all they can think to do when it comes to Trump.

What’s deeper about the slogan is that it also arises straight out of “The Monomyth” as articulated by Joseph Campbell.  The core principle of the Monomyth is that the hero embarks on a journey which has at its core one overriding desire which is to “Return to the Ordinary World AGAIN.”

In 2015 as I initially saw the slogan I found myself feeling something familiar about that word “Again,” until I finally realized this connection.  He is basically drawing on “the power of myth” with the slogan.  Yes, that is how deep his narrative intuition goes.

RECOMMENDATION:  The Democrats need a slogan.  It’s that simple.  We live in a media society.  For mass dynamics, you can’t opt out.

One of the key observations that has emerged from our Story Circles Narrative Training — which is approaching our 50th circle — is the power of the Dobzhasky Template that I first introduced in “Houston, We Have A Narrative.”  This is my template for finding the “One Word” that is the narrative core of a topic.

Nothing in America today makes sense, except in the light of GREATNESS.

That’s it.  That has been his message from the start and hasn’t changed one bit.  It pervades everything he says.  He is constantly hammering home this need for everyone.  He ends most speeches with it.

He doesn’t have any sort of analytical understanding of narrative.  He could never teach a course in it.  He only embodies it.

RECOMMENDATION:   Put the Dobzhansky Template to work.  It’s simple.  Nothing in _____ makes sense except in the light of _____ .   This is the tool to help you pinpoint your theme, and your theme is your message.

In the fall of 2015 I defined “The Narrative Index” as simply the ratio of the words BUT to AND in any given text.  I found that everyone from Abe Lincoln on the high end to George W. Bush on the low end shows consistent patterns in this simple metric.

I’ve posted repeatedly about Trump’s high scores for the Narrative Index (here, here, here) and have talked about overall patterns of the Narrative Index for everyone who is yearning to lead society.  I also presented it in the 2nd edition of  “Don’t Be Such A Scientist” this spring.

RECOMMENDATION:   Track down the speeches of your favorite candidates and simply use your word processor to count the occurrence of BUT and AND, then calculate the ratio of the BUT to AND.  If it’s below 10, you’ve got a problem.  And while you’re at it, also calculate the AND Index, presented here.  If it’s over 3.0, you should be concerned, if it’s over 4.0 there’s definitely a problem.  Trump’s average for about 20 speeches was below 2.0.  Trump knows narrative.

Trump’s use of nicknames (Crooked Hillary, Lyin’ Ted, Pocahantas) is about mass communication, far more than bullying.  This is where you can see how journalists simply don’t understand entertainment.  The only context they seem to be able to view this issue in is bullying.  There’s a stunningly long list of these names on the Wikipedia page for them.

But it’s much deeper.

These are simple, singular labels that cut through the noise of today’s information overloaded world.  All you have to do is read the 2012 bestseller “The One Thing” to see the significance of these nicknames.

From the start the Democrats have been completely confused by the names.  All they could think to do is chuckle and dismiss them as being just silly.  They aren’t silly.  They are powerful communications tools, identical to stereotypes.

And just two weeks ago I listened to Chris Matthews on his show “Hardball” on MSNBC chuckling dismissively about the latest label from Trump: the Failing New York Times.

RECOMMENDATION:  Stop laughing.  And come up with one singular, simple, widely agreed upon and used insult name for Donald Trump.  Why hasn’t this happened?  Yes, lots of pundits have proposed their own names, but a hundred different names is no different than none.  The number you want is ONE and only ONE name for him.  Have the Democrats not wanted to hurt his feeling?  I just don’t get it.  Fight fire with fire, and do it fiercely.

Here is Trump’s ultimate tactic, straight out of narrative tradition — the omniscient narrator.  It’s what mass audiences seek — not someone who “has the courage to say they don’t know,” but rather someone who is willing to emulate what you get in a good novel — the all-knowing narrator.

Yes, it’s that simple.  We crave certainty, he’s willing to provide it, even if it’s a pack of lies.

RECOMMENDATION:   Find the things you’re certain of for the Democratic party and lead with them.  It’s what I’ve said for years.  “An Inconvenient Truth,” should have opened with the incredible things climate science has brought us that we can be certain of (i.e. El Nino, fixing the Ozone Hole).  You don’t lead with statements about what might happen in the future that you’re uncertain of.  You open with what we can all agree upon, and you milk it for all its worth.

And while they’re at it on the confidence front, why don’t the Democratic members of congress confidently make the case for prohibiting the president from using Twitter.  He’s the most important diplomatic voice in the country, why can’t the people control him?  Desperate times call for desperate measures.   Innovations in technology call for innovations in legislature.