On November 10, at the annual meeting of the Entomological Society of America in Vancouver, we ran an interesting session on “Shaping the Narrative of Invasive Insect Species” that ended with lots of frustration and feelings of “we’re not done here yet.”  Which was excellent and “as planned.” These are the sorts of tough, challenging communications exercises that are needed everywhere. 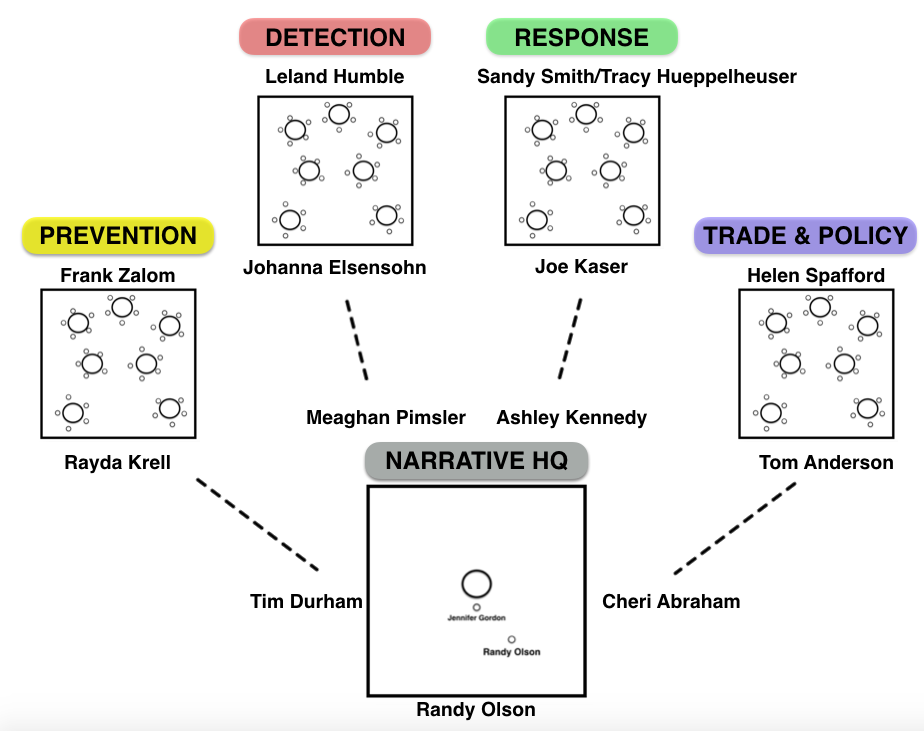 SHAPING THE NARRATIVE OF INVASIVE INSECT SPECIES.   We broke the issue of invasive insect species into 4 sub-topics (Prevention, Detection, Response, Trade and Policy).  The groups of experts ranged from 10 to 40 people.  Each sub-topic was in a separate room.  All  the rooms were connected to “Narrative HQ” by individuals on laptops editing in Google Docs.  The groups followed a schedule for 90 minutes, applying the two tools — the ABT Narrative Template and the Dobzhansky Template — to their sub-topic.  As they typed in drafts of their ABTs into Google Docs the group in Narrative HQ read them aloud, then sent back notes, creating iterative rounds of revision.  It was fun, really interesting, and produced substantial progress in figuring out the narratives, BUT … not finished products.  You can’t expect that in a single day’s effort.

WHY ONE DAY WORKSHOPS TASTE GREAT, BUT ARE LESS FILLING

A workshop is a story.  It has a beginning, a middle, and some sort of end.  Everybody wants endings of stories to be happy — sometimes at any cost.  Which means most people want their one day workshop to have a happy ending.

This is because of a basic piece of bad programming of the human brain called “the closed ending.”   You won’t find a movie that makes over $100 million at the box office that lacks it.  “Chinatown” didn’t have a closed ending (“Forget it, Jake, it’s Chinatown”).  But “Chinatown” also didn’t make over $100 million (it’s made $29 million lifetime).  Plus it was made pre-Information Society, when audiences still had some last ability to handle an open ending.

But today most people don’t like going home feeling like the problems you set out to solve aren’t yet solved.  That leaves you suspended in Joseph Campbell’s “Special World” — which might be exciting for your brain, but makes it hard to relax.

WHY I NO LONGER SUPPORT ONE DAY WORKSHOPS

Now, think about a one day workshop.  In Version A, the participants fill out the blanks for the 12 stages of The Story Cycle derived from Joseph Campbell’s Heroes Journey.   They have a fun day learning about “the power of story” then go home with their own complicated, multi-faceted story and the feeling like they “nailed the story thing” all in one day.

This is what a scientist from a major aerospace research facility told me about a few years ago — the workshop he attended that left him feeling he could check off “the story thing” from his list of problems to solve.  But the problem is that narrative takes time to learn — you can’t expect to nail it in a day.

This leads to Version B, which is what we preach with our Story Circles Narrative Training program.  It’s not for the “get ‘er done now” crowd.  It begins with the fact that you just can’t accomplish much in a single day when it comes to narrative.  You need long term, sustained effort.  And this is the same mind set I brought to our ESA session.

OUR “SHAPING THE NARRATIVE” SESSION AT ESA

We ran a very interesting session at the ESA meeting that is described in the caption above.  Let me start by offering my sincere thanks and kudos to the organizers for being brave enough to try something this original.

A couple hours after the session we had an hour long panel discussion in front of the larger group of a couple hundred entomologists.  For the panel, each of the 4 sub-topic groups presented just two things for their session — basically the one SENTENCE and the one WORD, using the ABT Template and the Dobzhansky Template (both originally presented in, “Houston, We Have A Narrative”).

Each person had about 15 minutes for Q&A where the audience mulled over the two items.  None of them produced stunned rounds of spontaneous applause.  It wasn’t meant to be a self esteem building session.  It was meant to provide a start on “shaping the narrative” and to show how hard this narrative stuff really is, and that’s exactly what it showed.

By the end there was a feeling that each group had made a solid start and had something that was probably pretty close to the central narrative of their sub-topic.  But the session also sent everyone away feeling like “we’re not done here.”  And while it was frustrating for some, it left me feeling very good.

Narrative is an endless journey.  You’re never completely finished with it.  Read Christopher Vogler’s brilliant Preface to the second edition of his landmark book on narrative, “The Writers Journey.“   He talks about coming to realize that The Heroes Journey (which is a more elaborate version of the ABT) is, “nothing less than a handbook for life.”

That’s how deep this stuff is.  And the reason why people are enjoying our Story Circles Narrative Training program.