Here’s two representative examples of communication from President Donald Trump this fall — a speech and an interview.  One scripted, one unscripted.  His Narrative Index (But/And ratio) for both is completely predictable.  As expected, for his rigid, tightly scripted speech to the U.N, it was very low (6).  But for his combative, unscripted comments to two journalists for the Washington Post, he scored aggressively high (33).  Is there any other metric that reveals what’s going on inside this guy when he speaks?  If so, I haven’t seen it. 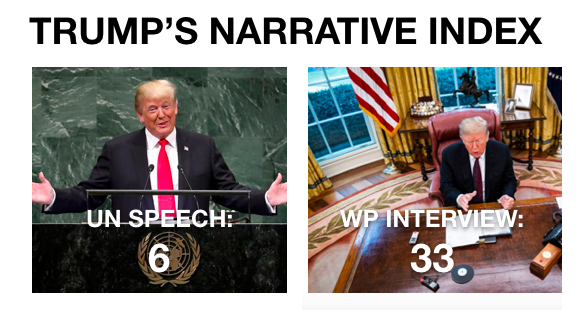 IT COULDN’T BE ANY MORE SIMPLE, OR PREDICTABLE.  When he needs to be delicate (wouldn’t want to go so far as to say “diplomatic”), he avoids “but.”  But … when he’s cornered and off-script, he buts away.

A president can’t use profanity (much), but the word “but” is the next best thing.  It’s what comes out when someone is reaching hard — as in, “But, but, but — let me say this … “

Diplomats are often taught to not use the word “but” at all.  This is what I learned when I ran a Story Circles Demo Day with a group from the U.S. State Department.  But, combative people use it a lot.

HOW KNOWING THIS IS USEFUL

I’ve been documenting the Narrative Index and Trump since the fall of 2015.   The index is useful — it tells you something about who is writing the text, and how much thought is going into it.

Prime examples of combative presentations include this year’s Michelle Wolf “take no prisoners” assault at the White House Correspondents dinner (47), Trump’s Al Smith dinner speech (38), Nixon’s first inaugural address (47), and Barbara Jordan’s legendary 1976 DNC speech (39) (I love it that Nixon and Michelle Wolf hit the same score).  It’s rare that a speech goes above 30, and only a handful go above 40.  Most are in the teens.

There are countless articles about how Trump is a “master manipulator,” and countless “experts” — from psychologists to rhetoric dudes — claiming to understand EXACTLY why he’s so effective.  Whatever.  They have mostly produced useless poop.

All I know is that the Narrative Index is simple (the But/And ratio x100), objective, and reveals countless patterns.  I don’t claim to be an expert on this stuff, I just know a pattern when I see one.