For the Narrative Index (BUTs/ANDs), most speakers score in the teens.   A few reach the 20’s.   A very few reach the 30’s.  Trump scores in the 30’s when he goes off script.  It directly reflects that he is an angry, aggressive, and frustrated man.  With a sufficient sample size (over 1,000 words) the frustration is revealed by the use of the word “but.”  And so, for his recent crazed CPAC speech (which was a staggering 16,000 words), as could have been easily predicted, he scored a 36.  In contrast, the most recent speeches by Bernie Sanders, Elisabeth Warren and Beto O’Rourke have scored, respectively, 18, 17 and 4. 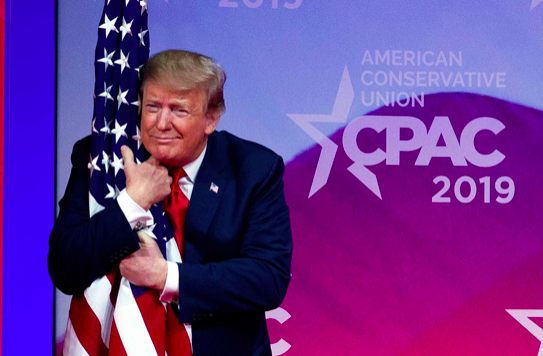 MADMEN AND THE NARRATIVE INDEX

The Narrative Index is the ratio of the words BUT to AND.  It’s amazingly consistent.  Definitely not precise (wouldn’t want to say there’s a real difference between someone who scores a 15 versus a 19), but definitely accurate (someone who scores double that of someone else is definitely drawing on the power of narrative).  Trump scores high when he’s not being constrained by speechwriters like Stephen Miller.

Just think of a heated conversation — about that moment where the frustrated person shouts, “But, but, but …”  That’s basically what you’re looking at.  The word “but” is at the heart of narrative.  People who are in attack mode are forced to use it to make their arguments — “The establishment says this, BUT I say this …”

President Trump was in crazy attack mode at CPAC.  The Washington Post called it “unhinged,” the Atlantic called it, “bewildering.”  But … what they should actually be calling it is “narratively powerful for his base.”  That’s what the 36 shows.

You know who scored the highest Narrative Index that I’ve ever found in a political speech?  Who was the most pent-up, frustrated, vindicating-feeling president to ever be elected?  Here’s a hint — he was humiliated by the handsome Jack Kennedy in his previous effort.  He scored a stunning 47 in his first inaugural.

He wins the award for most portentous opening statement of a political speech ever as he began with, “Each moment in history is a fleeting time, precious and unique. But some stand out as moments of beginning, in which courses are set that shape decades or centuries.”  Yeah, he shaped a few decades, big time.

I can tell you right now, assuming a smoking gun doesn’t emerge in the investigations of Trump, he is going to win re-election if the Democrats don’t find someone who can reach above a 30 for a Narrative Index score.  I called the last Trump victory, I’m calling the next one based on this.

In a media society, it’s all about communication, which means narrative structure.