If you don’t see the difference between the phrases “Science Needs Story” and “Science Needs A Story,” you probably need to develop a deeper understanding of what the word “story” means. 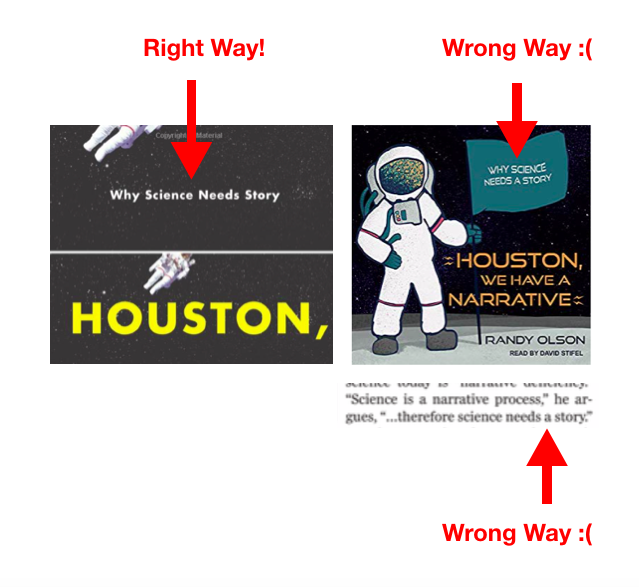 IT ISN’T ROCKET SCIENCE.  You look at the cover of the book, then you copy the text, word for word.  You don’t add the letter “ A” to it.  Seems simple, but apparently it’s difficult, both for the editors of University of Chicago Press (that’s their graphic for the new audio book version of Houston, We Have A Narrative) and Science (that’s an excerpt from the review of the book in 2015).

I SAW IT COMING BEFORE PUBLICATION

A funny thing emerged as I was developing the title and subtitle for Houston, We Have A Narrative, in 2014.  I came up with the subtitle of, “Why Science Needs Story” and sent it to about a dozen science friends and a dozen non-science friends.  Three of the science friends wrote back saying it sounded good but that I left out the “a.”  They assumed I meant to say that science needs “a story” – like “once upon a time there was a profession called science …”

None of the non-science friends did that.

After the first one, I thought it was just a quirk.  But by the third I realized it was real.  Scientists don’t live in the world of story editing.  As a result, they tend to see the word “story” as only a noun — as in “tell me a story.”

But most of the non-science friends I sent it to were film people.  They instantly recognized what I was saying — that the science world needs strengthening in its story skills.  It’s like looking at an athlete and saying, “You need more ab.”  It doesn’t mean, “You need more abdominal muscles.”  It means, “You need to strengthen your abs.”

Same thing.  But apparently a lot of science people don’t get this, starting with Rafael Luna who wrote a misguided review of the “Houston” book for Science.  In his review he quotes the opening statement of the book as saying, “… therefore science needs a story.”  Nope.  Wrong.   There was no “a” in my original text.  But you can see it in print in his review.

I wrote a Letter to the Editor of Science, but the editor replied saying it was probably “just a typo.”  I tried to explain that no, it wasn’t a typo — it’s what happens when science folks don’t understand this basic property of “story.”  The reviewer showed elsewhere in the review he had no understanding of this at all as he said the book was meant for settings, “such as a dinner party or community outreach event” — which is one of the very stupidest things written about anything I’ve ever created.

He should be made to explain those words to the several hundred graduates of our Story Circles Narrative Training program which has the “Houston” book at its core.  They know what’s in the book is far deeper than dinner parties and outreach.  Sheesh.

AN AUDIOBOOK MAKER WITH A TIN EAR

Now I’m forced to look at the same mistake for the new audiobook version of Houston, We Have A Narrative (and by the way, University of Chicago Press produced the audio book without ever even telling me the were doing it.  I had to find out from people who sent me emails.  Everyone should be forewarned about that if you publish a book with them)

Look at the graphic they produced (above).  Same mistake.

Ugh.  Anyhow, this isn’t just bitching.  There’s a serious point here — that because the basic understanding of “story” is not taught in the science world, many of the science folks end up making this mistake which most don’t even see as a mistake.

I know it seems trivial, but it’s reflective of an entire community that fails to value communication, relentlessly, over and over again.  Which is actually pretty much “the story” of science.   Great profession AND lots of great people, BUT a fundamental lack of appreciation for the importance of communication, THEREFORE …