If you combine the accumulated knowledge of Hollywood and neuroscience, you end up with a clear, albeit analytical pair of definitions for the words “story” versus “narrative.”  It’s not a very nice thing for art, but it’s essential for strategic communication.  Here is Appendix 1 from my new book, Narrative Is Everything: The ABT Framework and Narrative Selection, where I present the divide between the two words. 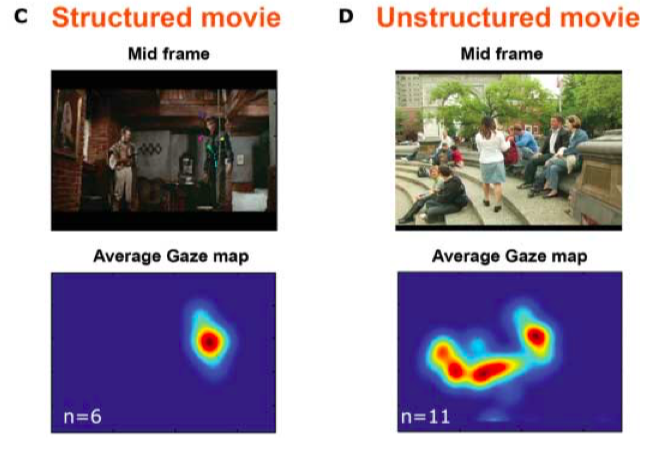 NEUROCINEMATICS.   This is from the 2008 paper by Hasson et al. that introduced the term “neurocinematics” (the link is below).   They identified “structured” versus “unstructured” films.  I would call them “narrative” versus “non-narrative” films.  Keep in mind, you can have a film full of actors and scenes that does not tell a story and is thus non-narrative.  Just because you have actors and fiction doesn’t mean you’re telling a story or that it’s a narrative piece.

I have a lot to say on this very important divide that most humanities folks have no interest in, but is very important for more analytical/strategic folks.  Six years ago my thoughts on the divide were tenuous, but these days I feel certain about this and know that it’s essential for clear, strong communication.

To this point, when we titled our group-written book, Connection, in 2013, this was exactly what we were referring to with the subtitle, “Hollywood Storytelling Meets Critical Thinking.”  It’s critical thinking that brings you to the realization that these two words are NOT the same.

Below is the first appendix from my recent book where I at last laid out my explanation of how the two words differ.  What I don’t get into in this section is the fact that “the brain is lazy” (as per Daniel Kahneman) which means we live most of our lives blabbing away in the non-narrative world, making endless statements, ESPECIALLY when it comes to social media, which is largely a non-narrative medium and ultimately shallow and largely non-memorable.

In my books I’ve gone into this in greater detail.  So far, neurophysiology tells us VERY LITTLE about “narrative and the brain” (though most journalists are not in the business of telling you very little so they tend to over-interpret the minimal findings — case in point the bunk of Paul Zak that has been roundly criticized).  But there are a few simple findings that are clear — namely that non-narrative material is not very stimulatory and causes the brain to wander, while narrative material activates a large amount of the brain and produces very focused patterns of activity.

The best work I’ve found on this to date is that of Uri Hasson at Princeton, starting with his foundational presentation of his field of “neurocinematics” in his multi-authored 2008 overview paper.

So here is my formal parsing of the two words.

In 2011, my improv-instructor buddy Brian Palermo began making a bit of a noodge of himself in our workshops. I would use the words “story” and “narrative” liberally. He finally asked, “What’s the difference?”

I scoffed, obfuscated (the very thing I complained about in this book’s Introduction) and said, “You can’t separate them.” I told him the terms are too broad and all-encompassing to parse. He said bullshit.

We had that exchange enough times that I began to think about what he was saying. He was right. I was being lazy. So I put the same question to a senior communications professor at USC who had been a huge help over the years. He scoffed, obfuscated and dismissed me, saying, “You can’t separate them.” I wanted to say bullshit, but was a little more polite.

By 2014, I had figured out what I feel is an effective set of working definitions for the two terms which I presented in Houston, We Have a Narrative. It’s now five years later. I not only stick with the definitions, I also think they are important, and that most people using these terms are just being lazy in not thinking this through.

We live in an information-overburdened world now. We know that narrative structure is at the core of what we have to say. But you can sense the two words are not identical just by how people respond to them. Story has a sense of human warmth to it, while narrative is more cold and analytical.

So here are my analytical definitions of the two.

Famed mythologist Joseph Campbell did a comparative study of storytelling among the various religions and cultures of the world and found that their stories follow a basic form, which he called “the monomyth.” 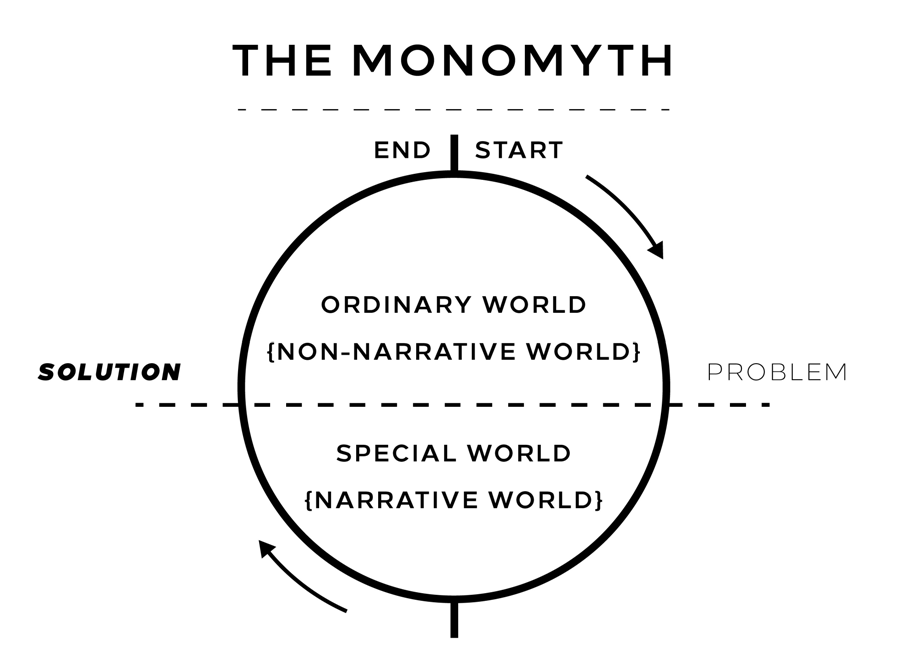 JOSEPH CAMPBELL’S MONOMYTH MODEL FOR A STORY. A “story” is this entire diagram. “Narrative” refers to just the bottom half—the problem-solution part of the journey—which is the driving force of a story.

Campbell defined the structure of a story as a circular journey that begins and ends at the same place. Along the way, it passes through three phases:

1) THE ORDINARY WORLD (NON-NARRATIVE) – The first phase is what he called the “Ordinary World.” I would re-label this the “Non- Narrative World.” This is the initial part of the story, which is usually called “exposition.” It is largely intellectual. Information is presented, but there has yet to be a problem encountered, which means that the problem-solution part of the brain has not yet been activated. This is the A material in the ABT template. If it goes on for too long it will become the AAA template and bore everyone. We’ve all seen movies that left you wondering, “When is this going to start to get interesting?”

The “something” that initiates the problem can be finding a dead body, having the ship hit an iceberg, or having a tornado take a little girl to a new world. The corresponding problems are: whodunnit, how are we going to save everyone on the ship, and how is the little girl going to get back home?

3) RETURN TO THE ORDINARY WORLD (NON-NARRATIVE) – The third part of the story starts when the problem is solved. The murderer is found, the people are saved, and the little girl returns home. This allows the narrative part of the brain to relax (mission accomplished) and return to a resting state. The final part is similar to the first part—i.e., more intellectual—now synthesizing and philosophizing about what was learned in the course of the journey.

So this becomes the distinction. “Story” is the entire package. It’s the whole journey, from start to finish. It consists of both narrative and non- narrative material. It’s warm, human and multi-dimensional.

As I mentioned in Chapter 2, Ronald Reagan was a storyteller. He would take the time to set up a story, providing human details to make it relatable. Then he would end it with some element of how the story relates to our world.

Donald Trump is not a storyteller. He hates small talk, which is what he would call the details of the Ordinary World (the intellectual part—not his strength). He prefers to just “cut to the chase,” by starting with the problem.

So here is how I roughly define the two terms:

NARRATIVE – The series of events that occur in the search for the solution to a problem.

What this means is that a series of events that never get out of the And, And, And mode of the non-narrative world are not, technically speaking, a story. This means that a resume or chronology is not a story. A series of events doesn’t become a story until a problem is established, which sets up the narrative part of the journey, which is the heart of the story.