In 2011 Neil Degrasse Tyson showed the programming flaws in his brain with his first appearance on HBO’s “Real Time with Bill Maher.”  Science without a solid grounding in the humanities is dangerous.

“I RIPPED OFF MY MASK”

In February, 2011 a friend brought me along to back stage at HBO’s “Real Time with Bill Maher” on the night of Neil Degrasse Tyson’s first appearance on the show (along with the soon to be ignominious Anthony Weiner).  During the show Tyson had a classic moment.

The discussion had drifted into politics.  When it hit on civil rights everyone turned to Neil for the African American perspective.  He made a couple of valid points and had everyone’s attention, but then he said something along the lines of, “Look, it’s as simple as running a randomized double blind replicated experiment on …” Basically a bunch of science jargon out of nowhere.

There was a pause, then Bill Maher said, “What the fuck?” and everyone exploded into laughter at the scientist who had lost his audience.

At the party in the green room after the show I mentioned that moment to him.  He laughed wildly saying, “I know, I had them in the palm of my hand, and then it was like I ripped off my mask and shouted, I’M A SCIENTIST!”

He’s a great guy, that was a hilarious moment, and he’s certainly a priceless asset for the science world, but … he’s no Obama.  As he unfortunately demonstrated in grand fashion yesterday witha tactless tweet in the wake of the mass shootings, prompting a half baked apology today. 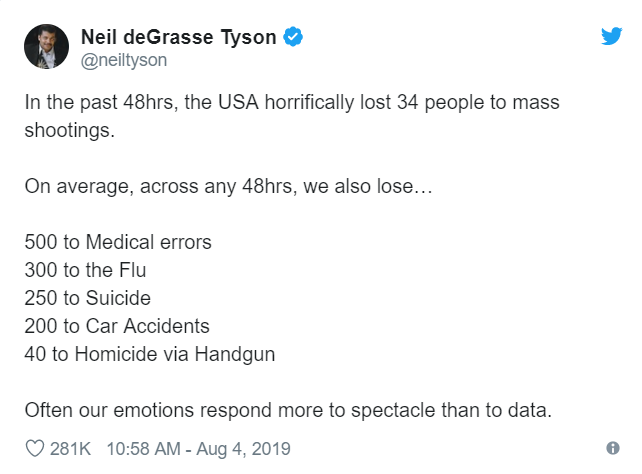 The Obama comparison is an important point for everyone to keep in mind because it underscores the bigger point of how science is not going to solve all our problems any time soon, so why are we letting the sciences trample the humanities in our society?

I could go on at length about this, as I did a bit last year in the 2nd edition of “Don’t Be SUCH A Scientist”(and btw, Tyson 100% embodied the title yesterday).  But instead I’ll just end with the plea I made in the book, “Make Science Human.”