We live in a media society, yet the members of congress have almost no in-depth media skills. Specifically, Senate.gov in 2018 said, “the dominant professions of Members of Congress are public service/politics, business, and law.” Those are not media/entertainment professions. And yet, we live in a media society where the head politician, the president, does himself have a background in media and entertainment which has clearly given him a huge, huge advantage over the past four years in working the media in his favor. The Democrats had one senator from the entertainment world who could match the president because he understood the importance of “performance” for today’s government. But they got rid of him. 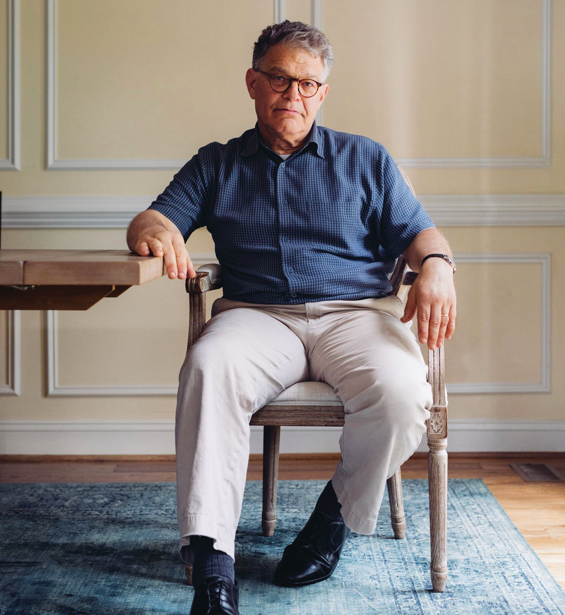 AL KNOWS NARRATIVE. Of course he does. He comes from the entertainment world. He was a priceless resource for the Democratic party. He has deep narrative intuition. Still. (Photograph by Geordie Wood for the New Yorker)

SHOOT THE LAWYERS (NOT THE ENTERTAINER)

I am of the opinion that the obliteration of Senator Al Franken was the worst political event I’ve witnessed in all of my years of following politics, going back to the early 1960’s. The injustice of it was revealed powerfully in, “The Case of Al Franken,” the excellent New Yorker article last year by Jane Mayer.

After resigning from the senate (which still feels surreal), Franken went away for a while, but last year returned a little bit with his new podcast which I thoroughly enjoy. Last month he had as a guest MSNBC host and long time political writer Lawrence O’Donnell. It’s an excellent episode — lots of fun, lots of substance, but then eventually a sequence that I found once again heart wrenching.

It’s heart wrenching because Al Franken was the only Democrat with the skills to match communication wits and style with the worst of the loudmouth right. He took on Rush Limbaugh with his books and Bill O’Reilly in person.

Why was Franken so exceptional with opponents like that? Because of irrationality. Those sorts of characters are not bounded by the truth. They are completely irrational, which drives rational, honest people crazy.

But comedy is an irrational force, and is the proper match for them. I said this a decade ago when highly rational and honest climate scientists were being driven crazy by engaging in debates with climate skeptics.

In 2010 I did a lengthy interview with climate skeptic Marc Morano and concluded that the ONLY people who should engage in a “debate” with him should be comedians like Bill Maher. And Al Franken — who at least was a serious politician who still had comic skills. Before they banished him.

Franken understands theatrics, and theatrics are at the heart of today’s politics. He gave a little glimpse into this in his discussion with Lawrence O’Donnell. Here’s a sequence where they are talking about senate hearings. I’ve put the best parts in red.

AL FRANKEN: I was disappointed with some of the judiciary hearings — on Kavanaugh, on Bill Barr — that was a real opportunity — and, you know, I had a performing background and knew how to create a moment and … I feel like my former colleagues don’t.

LAWRENCE O’DONNELL – No, they don’t have performing backgrounds, and so they’re not going to be able to deliver this the way that television critics want them to —

AL FRANKEN – Actually, it’s not television critics so much — it’s about creating a moment that gets on TV.

LAWRENCE O’DONNELL – Right. Yeah. They don’t know how to do that. That’s performing. You’re both a writer and a performer. You need senators who have staffers who think that way and know how to think that way and they don’t, generally, you then need senators who know how to deliver it, and they don’t generally, even if you laid it out for them — this is exactly how they should perform this — they wouldn’t know how to perform it. And then it’s interactive, and the way you planned to do it with this particular witness might now work.

AL FRANKEN – Oh, you have to listen to the witness, all the time.

LAWRENCE O’DONNELL – Well now you’re talking about improvising, which just about no one can do.

AL FRANKEN – What I’m saying is, moments get on TV.

There you have it. “Moments get on TV.” That is what good storytelling is about — building to moments.

And this, once again, is the basic divide between the ABT and the AAA structure. The ABT sets up a context with the AND material. Then it builds tension with the BUT, and then … if it’s done well, there comes “a moment” with the THEREFORE.

AAA is just flatlining — laying out fact after fact after fact, never really quite building to “a moment.” It’s what prevails in congress, and why C-SPAN coverage of Congress has been a running joke for decades.

Franken is absolutely right. Members of congress don’t get this, and they don’t get it in a big way. The Democrat senators demonstrated it brilliantly with the Kavanaugh hearing as I discussed on a podcast — a gigantic scattershot mess of “everyone doing their own thing” that never built to anything other than yet another gigantic defeat for the Democrats.

Franken was the great dramatic hope for the senate.

And actually, he did finally get his one big moment. It was recounted in painful detail in Jane Mayer’s New Yorker article. It was the story of the week, the day, the hour and the moment when Senator Chuck Schumer visited Franken in his apartment in DC and told him he had until 5:00 that afternoon to announce his resignation.

That was definitely a dramatic a moment. Which sucked.