Trump speechwriter Stephen Miller is not just qualitatively dull — you can actually see his dullness in the narrative metrics of the speeches he writes. It’s been on display since the start of his speechwriting for Trump. The Democrats should hope he continues to be the (uninspiring, confused and narratively amateurish) voice of Trump. 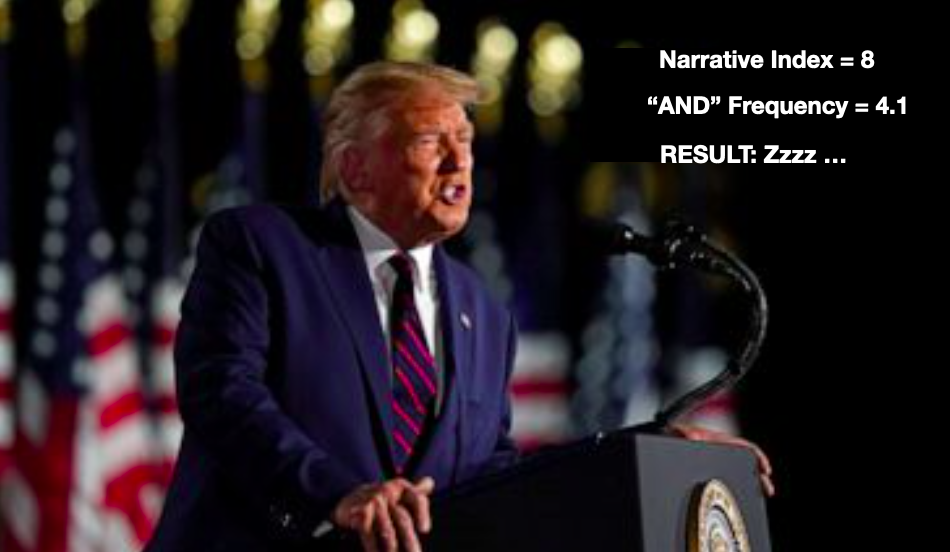 DONALD TRUMP’S RNC ACCEPTANCE SPEECH, just like all of his speeches that are written by Stephen Miller, was dull, flaccid, and devoid of narrative strength. This is not just me saying this — it’s the numbers.

Communication has two parts: CONTENT and FORM. Everyone talks about the content of Trump’s speeches, but it’s the form of speeches that determine whether they have lasting impact. Or not.

There’s a new book about Trump’s speechwriter, Stephen Miller, titled, “Hatemonger: Stephen Miller, Donald Trump, and the White Nationalist Agenda.” The author, Jean Guerrero has an article in the NY Times yesterday discussing Miller’s speeches, but her focus is only on content. Which means there’s more to the story. Much more.

In 2015 I published my book, “Houston, We Have A Narrative” (University of Chicago Press) in which I first presented the ABT Framework. This led to two simple metrics for analyzing narrative structure which are:

As a candidate, Trump’s values for the Narrative Index were exceptionally high (always above 20, frequently above 30) and his scores for the A.F. were impressively low (rarely above 3.0, sometimes even below the ideal value of 2.5).

I spent 2016 warning of the dangers of his communication skills. I teamed up with James Carville and we tried to explain this to the Hillary Clinton campaign, but hit the same brick wall everyone else did trying to communicate to them. Trump won. I ended up on Park Howell’s podcast, “The Business of Story,” telling about this which became one of his most popular episodes.

The poor communication skills of Clinton’s campaign were examined in painful detail in the 2017 bestseller, “Shattered: Inside Hillary Clinton’s Doomed Campaign.” In contrast, Trump communicated skillfully right up until March of this year when he finally ran aground with the problem of split narratives (economy vs health, which Dr. Dianna Padilla and I quantified in May in an article in Medpage titled, “COVID Leadership: Trump vs Cuomo”).

So there’s been this shift in Trump’s communication dynamics, but it’s actually the second major shift. The first one took place back in 2016 once he secured the Republican nomination. It was the appointment of Stephen Miller as his main speechwriter.

STEPHEN MILLER: THE VOICE OF DULLNESS

In June, 2016 Trump secured the Republican nomination and two things occurred. First, he shifted to using a teleprompter for his speeches which previously had been wildly spontaneous and off-the-cuff. Second, he brought on Stephen Miller to write his more formal speeches.

From then on, his speeches fell largely into two groups: 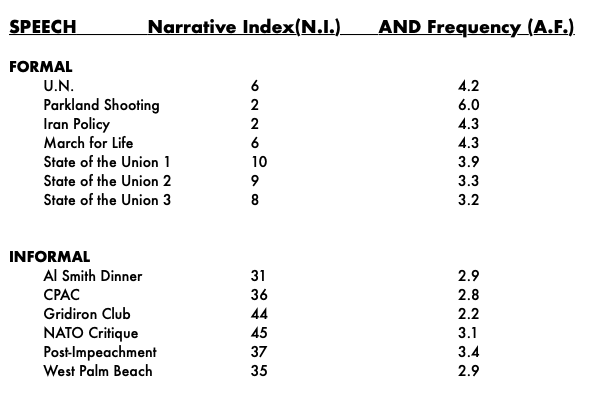 Look at the formal speeches — routinely below 10 for the N.I., often above 4.0 for the A.F. What that shows is the “And, And, And” structure which is largely non-narrative — just expositional.

Then look at the informal rants — rocketing up in the 40’s for the N.I., with the sparse use of “and” producing A.F. scores below 3.0. That is Trump at his most powerful when it comes to mass communication (and I’m not talking about communicating to the academics who are nauseated by him — I’m talking about the masses of America). The prevalence of the word “but” reflects the ABT (And, But, Therefore) narratively structured form.

THEREFORE … MY ABT STATEMENT ON STEPHEN MILLER

It’s very cut and dried. The bottom line is that when Stephen Miller is involved, there’s little narrative structure, just a lot of “And, And, And” (I had several friends text me during Trump’s RNC speech asking, “Doesn’t this seem like a lot of And, And, And?”)

But when Trump sidelines Miller and takes control, he’s very ABT — punching away, producing the version of him that his followers love. Which leads me to my own ABT about Stephen Miller:

Stephen Miller is indeed the voice of a lot of unpleasant content in Trump’s speeches AND those speeches are offensive to Democrats, BUT he’s not good — he has no grasp of narrative structure, THEREFORE Democrats should hope Miller continues to write Trump’s speeches.

BUT … watch out if Trump eventually stops using a speechwriter and reverts back to doing it all by himself. If that happens, it will not just be offensive content, it may be delivered in a dangerously powerful way.

Which means things will get ugly … -er.