They were there from the very first round of the ABT Framework Course in April, 2020. Two of them gave guest lectures in the first round (Palermo, Howell), two of them connected with elements of the business world from Park Howell that instantly resonated with them (Padilla, Knowlton) resulting in them joining the instruction team. By two years later the four of them had combined for over 100 guest presentations as well as embodied the single most important trait for the ABT Framework, which is the ability to LISTEN. They are true role models for effective communication and lead spokespersons for the ABT Framework.

THE FOUR LONG TERM “GUEST” INSTRUCTORS OF THE ABT FRAMEWORK COURSE SINCE ITS START IN APRIL, 2020.

The ABT Framework course has not been your basic “media training” program. It has been an incubator as we’ve slowly developed “strengthening the ABT” into a 3 step model. After two years of running the course, it looked by Round 24 drastically different from Round 1.

In the beginning there was no 3 Step Model, no books, no Working Circles — not much more than just the three word narrative template and the ABT Build exercise. But by the end there was a whole second level of detail.

Similarly, each of the guest instructors went through a sort of selection and change process. In the first year we brought in a wide range of guest speakers. It was partly to entertain myself during the height of the pandemic — a chance to have fun with old friends.

The guest speakers came from a diverse range of disciplines — filmmakers, scientists, actors, journalists — each making a connection with the ABT Template. But by the second year it became clear that four of the guest instructors needed to be recurring characters.

They became the central cast of: improv actor Brian Palermo, business podcast host Park Howell, senior scientists Dianna Padilla and Nancy Knowlton (all pictured above). Each one developed their individual presentations going from “a bunch of stuff” on their topic in the beginning, to eventually mostly their ONE THING which was LISTENING (Brian), CLIENT AS HERO (Park), PROPOSALS (Dianna), and OPTIMISM (Nancy).

By the end, each one fit together like puzzle pieces, following my 5 introductory “Nuts and Bolts” lectures on the basics of the ABT Framework. There were lots of great rounds of the course, though a few (the coral reef scientists, fisheries biologists, some of the National Park Service rounds, and East Carolina University) really stood out as exceptional.

One of the greatest parts of the whole project has been watching two senior scientists Dianna and Nancy fully absorb the power of the ABT Framework. I had them talk about this in a little detail a year ago in this 5 minute video.

The two of them, along with fellow septuagenarians Mike Strauss and Rick Nelson (formerly of USDA and USFWS, both central members of the instruction crew), demonstrate that it absolutely is possible for older scientists to learn the ABT Framework. This is a super-important point. I have had some older scientists say to me, verbatim, “I’m too old for that communications stuff.” Nope. Sorry. Turns out it’s actually easier for older folks, provided they’re willing to LISTEN.

THE MACHINE WILL NOW SHIFT GEARS

As I’ve said, two years, 25 rounds, over 750 ABT Builds for me … it’s been an intense and fun incubator for the ABT Framework. Now it’s time to apply what we’ve learned. As Matt David has pointed out, we’ve completed the “arouse” part of the “Arouse and Fulfill” couplet, now it’s time for the fulfillment.

So the course has been a huge success AND we’ve all had a ton of fun, BUT we want to see the ABT Framework in action for a bit, THEREFORE … we’re launching a new phase starting May 4.

I’ll be explaining this in detail in a blogpost in a few days. 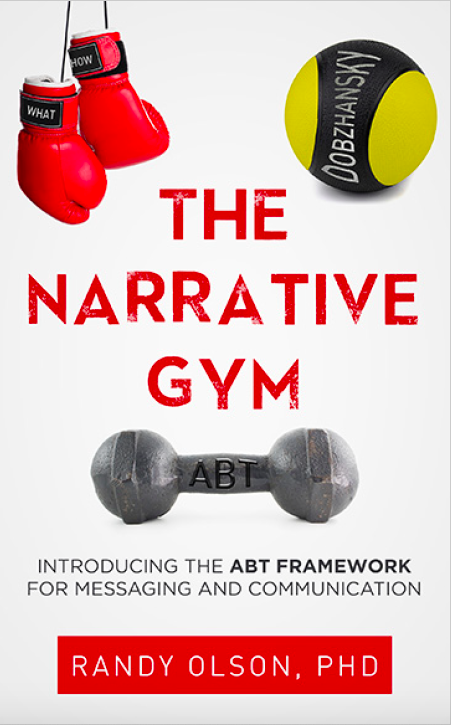 ONLY THE BEST for the ABT Framework course of 2020.

THE AND, BUT, THEREFORE OF A RATHER FASCINATING YEAR

What a year, right? Sheesh. It’s been the worst of times (the pandemic), but in some ways … well, I just can’t say it — not the best of times, but definitely some interesting times.

In April, our Story Circles Narrative Training program was derailed by the pandemic. Having nothing better to do, we decided to take a shot at an online course.

Eight months later here we are, wrapping up the 7th and final round of the course. Each round has featured a half dozen or so guests. The last round culminated with this amazing triple play of HBO veterans, all talking about the central role of narrative structure in their work.

We’ve never shared the content of the course, but these three discussions were just so fascinating, high energy and substantive that it would be a crime to not make them available to a wider audience. Each one is about 40 minutes — like three episodes of a podcast. I’m sure you’ll enjoy them.

HAVE A HAPPY AND SAFE THANKSGIVING

Have a Happy Thanksgiving, to the best of your abilities. There is definitely a better time ahead AND with the vaccines, things will return to normal by next summer, BUT for now, realize this is our COVID YEAR that requires sacrifice, THEREFORE do all you can to protect yourself and others, starting with one simple instruction which is to STOP SWAPPING AIR. You’ll be hearing more about this message in the near future.

THE ABT FRAMEWORK COURSE: A MEMORABLE YEAR