It was right there in their questioning.  If only they knew about the Dobzhansky “One Word” Template.  The Democrats needed to control the narrative — steering it towards the broader issue of TEMPERAMENT, rather than just the specific issues of sexual assault and alcoholism.  Mazie Hirono eventually hit on it, but it was too late.  TEMPERAMENT was “the Christmas tree,” to use the terminology of Dave Gold’s great Politico article last year.  The other stuff should have been just ornaments.  They missed it because they had no clear strategy.  As Obama said in 2012, they needed to, “Tell a story to the American people,” and the theme of that story needed to be TEMPERAMENT. 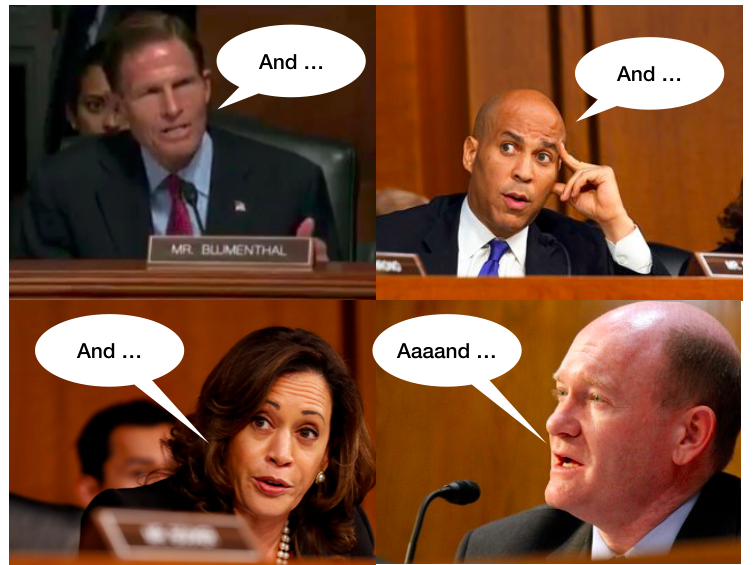 The ten Democrat senators had no clear overall strategy other than a shotgun blast of questions.  They had no singular ABT.

TO TELL A STORY TO THE AMERICAN PEOPLE

In 2012, when asked what was the biggest failure of his first term, President Barak Obama said the following:

“The mistake of my first term. . .was thinking that this job was just about getting the policy right. And that’s important, but the nature of this office is also to tell a story to the American people …”

So what was the story the ten Democratic senators told the American people on September 27 in the hearing for Brett Kavanaugh?

Rather than presenting a clear ABT structured narrative (Kavanaugh wants to be a Supreme Court judge AND a supreme court judge needs to have the right temperament, BUT he doesn’t, THEREFORE he needs to be rejected), they took a shotgun approach and ended up with a laundry list of complaints.

Examining the transcript, here’s the basics of what 10 Democratic senators covered in their 5 minute segments.

It’s was a bunch of stuff, but no single, consistent, repeatable theme emerged.

WHAT’S OUR THEME GOING TO BE?

In a perfect world, that morning, before the hearings began, the 10 senators would have met in a room to lay out their strategy.  At this point Senator Mazie Hirono would have spoken up, saying the one word she did say three times during her segment that afternoon — “TEMPERAMENT.”

The group would have thought this through, then said, “Great word — it has human qualities and is central to the qualifications for a lifetime appointment to the Supreme Court.  All of what we have for criticisms of Kavanaugh can be tied together under that one umbrella term, so let’s make it our theme for the day.”

Then the LEADER (something that’s clearly lacking in the Democratic party) would have figured out how to have the group “tell a story” that would have had a beginning, middle and end.  The leader would have said:

“Okay, Feinstein, you’re going first — you begin by explaining to the American people what TEMPERAMENT is and why it’s central to being a judge.  After her set up, then each of you need to connect your line of questioning to this one word theme.  Whitehouse, when you read the entries from his yearbook, explain how that material reflects on his TEMPERAMENT.  Harris, when you compare his process to Gorsuch, explain how Gorsuch had the right TEMPERAMENT to be a Supreme Court judge which made his confirmation easy, but Kavanaugh does not.  Blumenthal, instead of rambling through four topics, pick one that no one else has covered and relate it to TEMPERAMENT.  Then Harris, you’re last, so give us an ending to our story by pulling everything together, saying that we feel all of what we’ve heard today underscores our belief that Judge Kavanaugh lacks the TEMPERAMENT to be on the Supreme Court.”

Furthermore, this leader/narrative coach would have said, “If by some miracle we get lucky enough for this guy to lose his cool and present to the American public a live demonstration of his poor temperament by, for example, asking Senator Klobuchar if she has ever blacked out from drinking, or by claiming he is the victim of a left wing conspiracy backed by the Clintons … then whoever is next should make an issue of it by saying, “THIS is exactly what we mean by your temperament being wrong.”

TEMPERAMENT would have been the story for the American public.  Every newspaper would have carried the simple headline that the Democrats feel he lacks the TEMPERAMENT.   And the authors of the bestselling 2012 book, “The One Thing,” would have been saying to themselves, “wow, they must have read our book!”

But that’s not what happened.

I heard Senator Mazie Hirono on NPR that morning.  Look at what she said:

“ … what really will be focused on is, as far as I’m concerned, Judge Kavanaugh’s credibility, character and candor. And before all this began, I already questioned his credibility.”

She was the one who knew best that the focus needed to be at the broader level than just his high school transgressions.  She was saying, regardless of the accusations of Dr. Ford, she already had problems with him at the broadest scale.  And this is why she, alone, eventually found her way to the key word of TEMPERAMENT.

If you search KAVANAUGH TEMPERAMENT now, what you’ll see is a tidal wave of articles, but they all begin after the hearing.  Which is a shame.  Had the Democrats come up with a strategy, they could have started talking about TEMPERAMENT several days before the hearing.  That would have “planted” their theme in advance, getting ready for the hearing.

All of which would have established the simple core narrative, and allowed the senators to TELL A STORY to the American people.   Just as Obama said should happen.

But they didn’t.  The Democrats are just so totally narratively adrift these days.  It’s painful to watch.

They weren’t disastrous, they were only ineffective, as this article in Slate yesterday makes clear.  I found their performance exasperating.  Had I coached them I would have prepped them with three narrative principles:  1) the SINGULAR NARRATIVE, 2) the ABT STRUCTURE, and 3) the DOBZHANSKY TEMPLATE.  They didn’t have to be so scrambled.

Yesterday’s senate hearing on the Brett Kavanaugh nomination to the Supreme Court was supremely riveting.  I couldn’t take my eyes off either session — the painfully dramatic morning with the victim, the bombastic afternoon with the accused.  Throughout I was desperately wanting to cheer for the Democratic party senators, but by the end they left me feeling deflated.

The Democrats put on a performance that pretty much matched the entire party — rambling, unfocused, lacking a clear overall strategy.  This article in Slate does a good job of detailing the disappointments.  But it didn’t have to be.  Here’s how I would have coached them, using 3 simple narrative principles from our Story Circles Narrative Training program.

1 THE SINGULAR NARRATIVE:  LESS IS MORE

This is far and away the most important principle they seem to have no grasp on whatsoever.  It’s very simple — LESS IS MORE.

If you need an entire book to make this clear to you just read the 2012 bestseller, “The One Thing.”  If you want two absolutely tremendous short articles that convey it concisely and in practical terms it’s these workhorses that embody all that I preach:

“Nicholas Kristof’s Advice for Saving the World” –  Outside Magazine, November, 2009

Each senator was given 5 minutes.  Each senator began their time as though they had a half hour to make a whole series of points.

As a result, each senator was eventually cut off when their time ran out.  Instead of building to a clear, single point, they mostly said things like, “I’ve got a lot more to say.”

The Democratic senators should have huddled up before the day began and chosen individual singular narratives.  Sheldon Whitehouse (who I felt came off best) should have said, “Okay, Hirono, you take TEMPERAMENT, Durbin, you take FBI, Harris, you take GORSUCH, …”

On and on — ten Democratic senators, ten single points — each one delivered clearly, succinctly, and with simple structure.  All fitting into an overall narrative.  Like this …

When in doubt, just use the ABT (And, But, Therefore) template to make your point clearly and concisely.  This is how I would have scripted Kamala Harris.

KAMALA HARRIS:   Judge Kavanaugh, you have accused us of a left wing conspiracy against conservatives AND claim you are the victim of it, BUT you saw our hearings a few months ago for Judge Neil Gorsuch who was approved with no problems, THEREFORE don’t you think this is more about you than us?

She did do a decent job of presenting this, but it was buried in the middle of several other rambling points she was trying to make, with the result of “more is less” as nothing stuck out.

One point, argued clearly.  That’s what should have happened for each senator.

3 THE DOBZHANSKY TEMPLATE (ONE WORD)

The Dobzhansky Template is one of the central tools of our Story Circles program. It’s simply this fill-in-the-blanks sentence:

They should have agreed among themselves on this before the hearing, and I think they should have followed Mazie Hirono on it as she was basically arguing this:

Nothing in KAVANAUGH’S QUALIFICATIONS makes sense, except in the light of TEMPERAMENT.

She brought up the key word of TEMPERAMENT and that’s what they should have hung their entire narrative on.  They should have argued, from start to finish, the following ABT:

ABT:  To be a supreme court judge requires a specific temperament AND because the appointment is for life we have to make sure a nominee has it, BUT what we are reviewing here today for Judge Kavanaugh shows he does not have it, THEREFORE his nomination needs to be withdrawn.

That was it — plain and simple — the singular narrative of what they needed to accomplish.  All day long, the word TEMPERAMENT should have kept resurfacing, over and over again — as frequently as Donald Trump says the word GREAT in any given day.

It’s called messaging.  It’s what the Democrats are so incredibly bad with.  Yesterday’s hearing was a one day demonstration on how hopelessly bad they are at it.

I’m still rooting for them, but they are never, ever, ever going to regain power if they don’t figure this narrative stuff out.  It was what sunk Hillary Clinton.  It’s what plagues them every single day.