We’re breaking new ground with the ABT. You won’t find any of this in textbooks. For those of you who have taken part in Story Circles or read, “Houston, We Have A Narrative,” you should find this extra interesting. It’s an example of what I think is the subconscious avoidance of the BT words (BUT, THEREFORE) in a delicate situation. Check out what I’m saying here and see if you agree. If you have thoughts, please send me an email at info@randyolsonproductions.com 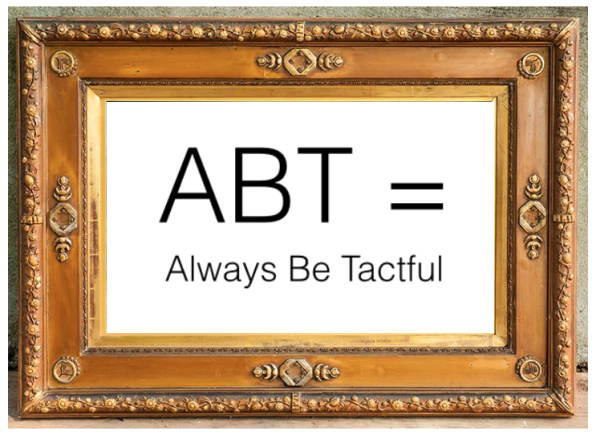 The words “but” and “therefore” (or “so”) are powerful in conversation. They are the core words of narrative — the words that cause the brain to activate the narrative centers. It’s a standard rule of thumb in dispute resolution to avoid the word “but” and most improv instructors (who are trying to work in the direction of affirmation) also ban the word. “But” is the prime word of contradiction, and “therefore?” is a word that people use in frustration when they are wanting to know what the speaker is getting at. Which means when things are delicate, you probably want to use them sparingly.

THE DIPLOMACY OF INDIVIDUAL WORDS

The New Yorker had a fairly painful and delicate article over the weekend about rape. The author, Jeannie Suk, was herself involved in the issue of a sexual assault case at Harvard that was presented in a new documentary. The article is both reporting on the politics of the documentary, as well as a statement of her opinion.

Because of the extremely sensitive nature of the issue, you can tell she has chosen every single word very carefully. What is interesting is to examine the ABT structure of her final paragraph.

Looking at it from the ABT perspective (and this is what I mean by the term “the ABT Framework”) you can get a feel for how delicate her word selection is. I’ve dropped in BUT and THEREFORE where you can sense they could go if you wanted to use them.

LAST PARAGRAPH OF THE ARTICLE:

Sexual assault is a serious and insidious problem that occurs with intolerable frequency on college campuses and elsewhere. Fighting it entails, among other things, dismantling the historical bias against victims, particularly black victims—and not simply replacing it with the tenet that an accuser must always and unthinkingly be fully believed. It is as important and logically necessary to acknowledge the possibility of wrongful accusations of sexual assault as it is to recognize that most rape claims are true. And if we have learned from the public reckoning with the racial impact of over-criminalization, mass incarceration, and law enforcement bias, we should heed our legacy of bias against black men in rape accusations. The dynamics of racially disproportionate impact affect minority men in the pattern of campus sexual-misconduct accusations, which schools, conveniently, do not track, despite all the campus-climate surveys. Administrators and faculty who routinely work on sexual-misconduct cases, including my colleague Janet Halley, tell me that most of the complaints they see are against minorities, and that is consistent with what I have seen at Harvard. (BUT) The “always believe” credo will aggravate and hide this context, aided by campus confidentiality norms that make any racial pattern difficult to study and expose. (THEREFORE) Let’s challenge it. Particularly in this time of student activism around structural and implicit racial bias pervading campuses, examination of the racial impact of Title IX bureaucracy is overdue. We are all fallible—professors, students, and administrators—and disagreement and competing narratives will abound. But equating critique with a hostile environment is neither safe nor helpful for victims. We should be attentive to our history and context, and be open to believing, disbelieving, agreeing, or disagreeing, in individual instances, based on evidence.

The first six sentences of the paragraph are a series of “and’s” with the fourth sentence even starting with the word “and.” This material is all exposition, setting up the overall argument using the ABT structure.

Try reading the sixth and seventh sentences the way she has written it, then try it again including the BUT. You can feel that the latter version is a little more powerful, a little more aggressive, a little more pushy — which is what she didn’t want to finish with given the sensitivity of the issue.

And then look at the next sentence — it is the clearly the statement of consequence or action. She is offering up her recommendation of what to do about this predicament (“Let’s challenge it.”). Of course hardly anyone uses the word THEREFORE, but you could definitley drop in “So, let’s challenge it.” But again, if you did, you’d be making the text more pushy.

This is what I’m saying about the delicate use of language here. Remembering that “the power of storytelling rests in the specifics,” you can see she went the opposite way, intentionally making her content less powerful.

The last paragraph is, of course, her summary statement of the article. It is also structured not just with the ABT, but actually with the five parts referred to by screenwriting guru Frank Daniel in his 1986 speech that I quote in my book. Here’s what Daniel said:

THE FRANK DANIEL QUOTE: In a dramatic story the pattern usually for the connecting scenes is: “and then,” “but,” “therefore,” “but,” and towards the culmination “mean­ while.” If you don’t have this “but” and “therefore” connection between the parts, the story becomes linear, monotonous. Diaries and chronicles are written that way, but not scripts.

If you look at the remainder of the text, you see the final two sentences match the five part structure described by Frank Daniel. Sentence #11 actually starts with BUT, and Sentence #12 is the culminating statement, “We should be attentive …”

This is what I’m talking about with the term ABT Framework. Once you learn these words and realize the narrative roles they play, you can start to break down the narrative structure of individual sections of text.

In this case, the ABT structure is present throughout the article, and nowhere more than in the final, wrap up paragraph.

I’ve now formed an Advisory Committee for Story Circles who are sort of my sounding board for the development of these sorts of thoughts and observations. One of them felt the BUT should be dropped into the third sentence, but … I disagreed. I think all the opening six sentences are statements of fact, including the third sentence. It’s the seventh sentence that says, “will aggravate,” which is basically a prediction, meaning it’s her statement of opinion.

And here’s one last narrative dimension of this one paragraph. I think those first six sentences are kind of convoluted with much of it being extraneous to her more important point. And actually, I have a feeling the very nature of it being so indirect and muddled as she’s trying to summarize her argument further reflects the delicate and hesitant nature of what she’s trying to say. It’s a very volatile subject at the moment for which I would expect even a well written essay like this one to have these sorts of narrative features.