Nothing like a challenging 14 hour day.  Things started at 8:30 in the morning and finished after dinner at 10:30.  In between was one fascinating discussion after another with the brightest group of scientists I’ve been around in a long time.  It was the perfect place for the message of striving for excellence by reaching for the ABT. 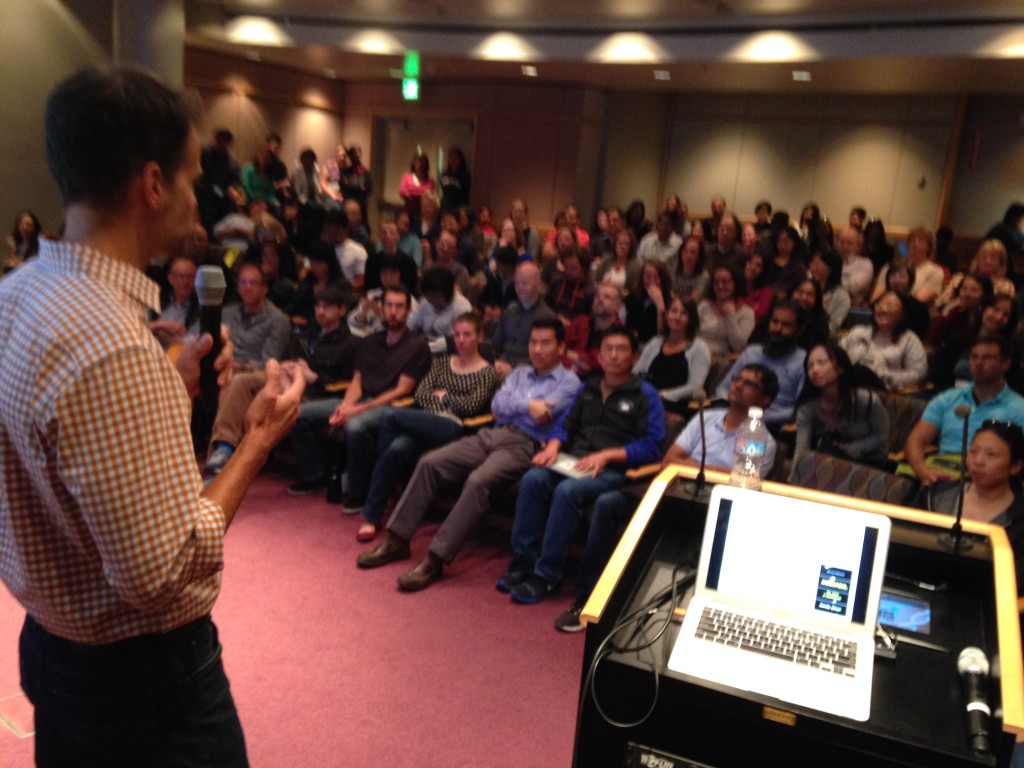 SRO. Nothing better than Standing Room Only where just about every seat is taken by someone with a PhD in science. I took this photo as Alex, my host, was introducing me at the start of my talk. Amazing group. And best of all, they laughed in all the right places.

I was expecting a challenging day at Genentech, but it kind of exceeded expectations.  I guess it’s what you get in the corporate world — no laggards.

The place is huge — about 50 buildings split into north and south campuses right on the San Francisco Bay.  It was one meeting after another with folks working on drug development, structural biologists, neurophysiologists — on and on.  Lots and lots of science that was beyond me, but all of which could benefit from narrative structure.

The most interesting story I heard all day was from a woman who had worked a couple years ago at Theranos.  Wow, what a mess.  I had no clue about that scandal.  Among many things it’s kind of an indictment of the bullshit nature of so many TED Talks.

If you don’t know the bizarre story of Theranos and it’s weird “visionary” leader Elizabeth Holmes, here’s a video from just a few days ago that tells the whole strange scandal of their massive valuation over a product they don’t appear to be able to deliver.

The toughest part of the day was a neurophysiologist who had read my book and grilled me for a half hour, unconvinced that teaching narrative would move the needle in the right direction.  He was concerned that teaching scientists to be “better storytellers” would just make them more adept at publishing false positives.  But that’s not what I’m advocating.

The book is not about “storytelling for scientists.”  That’s what people who do a shallow job of not reading it think it’s about.  But if you really dig into it you will see it is about “narrative knowledge for scientists” with the belief that the better you understand narrative, the more you will be aware of the blind spots towards positive narratives that come with being human and lead to telling big stories that are wrong (i.e. Theranos).  He understood this and I think by the end I had allayed his fears at least a bit, but a tough discussion for sure.

It was after that session that I asked my host, “Don’t you have one dummy I could meet with just to get a break?”  The answer was no.  Awesome place.

UPDATE TODAY:  A good OpEd in the NY Times on the Theranos mess which Silicon Valley had enough good sense to avoid.