I know we’re supposed to applaud climate scientists who speak out in defense of climate science, and I do.  But just getting media attention isn’t the challenge — it needs to have long term impact.  Which is where narrative dynamics come in.  I offer up this ABT analysis of climate scientist Mike Mann’s editorial yesterday in the Washington Post to help demonstrate the importance and power of narrative structure.  Yes, presenting lots of conflict draws attention for the short term, but for the long run, if you don’t have good narrative structure (i.e. all 3 of the ABT elements), you’re producing nothing more than “a sundry lists of facts.”  Which is what he did — all B, no A or T. 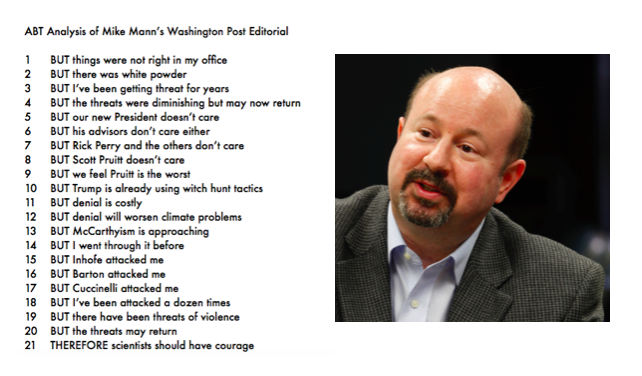 THE ABT ANALYSIS OF MIKE MANN’S CLIMATE EDITORIAL in yesterday’s Washington Post.

Climate scientist Mike Mann and I have been buddies since he was on the post-screening panel for my climate mockumentary “Sizzle: A Global Warming Comedy” at Penn State in 2009.  One of my first interviews for my blog The Benshi was with him in 2010.  He’s done a mountain of important work for the climate community, and borne the brunt of relentless personal attacks from climate skeptics — much of which he itemized in his Washington Post editorial yesterday.

But here’s the problem.  The narrative structure of his editorial is weak.  Yes, there’s a ton of conflict in it — a laundry list of attacks he’s endured.  But that’s all it is — in essence an AAA exercise (the dreaded And, And, And template).  Which is interesting, and maybe even a little bit curious, but in the words of Dobzhansky (as quoted in my last book), in the end he presents little more than “a sundry list of facts, some of which are interesting and curious, but ultimately meaningless.”

This is the hard part of narrative.  There’s more to delivering content that will “stick” (and btw, “Made to Stick” was nothing more than the fact that things stick when they have good narrative structure) than just making a list.

Okay, calm down, that’s not an insult, just a reference to the line from my hero James Carville (a master of simple communication) who coined the expression, “It’s the economy, stupid.”  This is the message to the climate crowd — it’s time to focus on the “THEREFORE” of your messaging.

There’s 21 paragraphs in Mann’s editorial.  20 of them are statements of the problem — on and on. If you’re part of the choir you can’t get enough of these details.  But if you’re only marginally interested (i.e. the masses), after a while you hit the point of wanting to “advance the narrative” which manifests itself with a feeling of “okay, I got it, you’ve been attacked a lot — what are you recommending we do about it?”  This is the power of the word THEREFORE.  It’s what begins to emerge when people work with the ABT — they begin to ask, “So then what’s the THEREFORE of your essay?”

In the case if Mann’s editorial, it was only 8 words at the end — “I would urge these scientists to have courage.”

It could have and should have been much more.  One of the key realizations we’ve had in Story Circles is that “the quicker you can get through the A and the B, the more we’re willing to let you have all day with the T.”  It’s the T that everyone really wants.

But also, without some attention to the A, there is little overall context, importance and depth to the message being delivered.  Yes, it’s nice to hook the reader with a first moment of conflict, but once that’s achieved it’s time to go to work on the basic narrative process starting with exposition. His editorial never did that.

THERE COMES A TIME FOR PREPARING …

If you find yourself getting furious at me for having the audacity to critique someone on the climate team then you’re probably as much of the problem as the climate skeptics.  It’s the same with the Democratic party which has delivered a colossal failure to this nation.  It’s a time for rational, analytical (not arm waving) analysis of what happened, why, and then delivery of the THEREFORE (how to do better).

Mann’s editorial should have given a couple of quick words of A (climate skeptics undermine the serious work that needs to be done, time is running out), a quick statement of the B (3 of his worst experiences plus all the signs that it’s now about to get really bad).  That should have been about 4 paragraphs.

The rest should have been the THEREFORE.  As in, “Therefore it’s time to begin preparing for the assault on climate science we know will come.”  It’s time to assemble defense strategies.  It’s time to look back to 2009 and realize how unprepared the climate community was for the email attacks of Climategate.  It’s time to shift the focus of science organizations from PUBLIC UNDERSTANDING (I served on the AAAS committee charged with this) to PUBLIC PERCEPTION of science.

This last one is big, and is very difficult for scientists to accept.  There is about to be a hell storm of attacks on the credibility of the entire science community.  David H. Freedman’s excellent 2010 book, “Wrong: Why Experts Keep Failing US” pretty much foretold that eventually the problem of “fake news” (which is no different from “false positives”) would emerge.  The door is now wide open for major communications chaos for science.

I saw it four years ago in my local California community where there was a painfully divisive local environmental issue. The anti-science forces wrote editorials in our local newspapers saying, verbatim, that today “scientists are no different from lawyers — you can buy one to argue whichever side of an issue you want.”  That, of course, is not true, but you better get ready for this at the national level.  It’s coming.

Last week I had dinner with the head of the largest science organization in the world.  I detected no major preparations in progress for the coming onslaught.

The bottom line, it’s time for a lot of THEREFORE’ing about the climate skeptic/anti-science community.  But I don’t see it happening.  At all.

All I’m seeing coming is a whole lot of the same old Climategate “Well, that just isn’t fair” reactions.