There is a myth among the left that Donald Trump can’t stand to be laughed at and ridiculed. You hear it confidently, smugly explained night after night by “expert” guests on every news talk show on MSNBC. That’s them using THEIR set of fears. There’s only one thing Trump cannot stand which is: NOT GETTING ATTENTION. We exist now in The Attention Economy and he is greedy. He lives his life for attention, and he gets it through his deep and thorough intuition for narrative. Laughter and ridicule are not part of the currency, which means they are trivial to him. All of which is beyond the intellectualism of the left. Also, note this for Trump’s Narrative Index (BUTs/ANDs): TRUMP WITH SCRIPT (on Afghanistan) = 6, TRUMP RANTING SPEECH (in Phoenix) = 23. The man knows narrative. 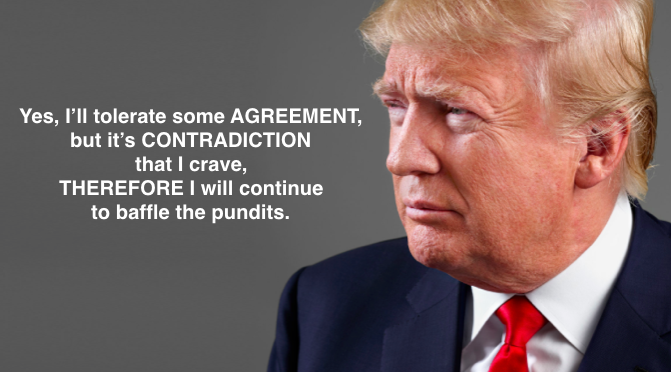 TRUMP KNOWS NARRATIVE so incredibly well, leaving his opponents in the dust. At least for now.

For the past 15 years a few very smart people have realized that our core currency has shifted to one central resource: ATTENTION. Starting at the turn of the century books began to emerge with titles like The Attention Economy (Davenport and Beck, 2001) and The Economics of Attention (Lanham, 2006). What I don’t get is why news pundits have not put that knowledge together with the fact that we have THE most attention-seeking President ever, and produced at least some body of thought to explain and predict his behavior.

To the contrary, what we have over and over again is massively educated pundits on the left analyzing Donald Trump using THEIR rules of how people should think and act. Which leaves them endlessly baffled. Could they be any more lost?

NOT THE BEST FOOTBALL TEAMS

Trump loves CONTRADICTION, the central force of narrative (which is AGREEMENT, CONTRADICTION, CONSEQUENCE). Let me give you a little example of this.

Last fall he showed up in the control booth at the Army-Navy football game. The two hosts were thrilled. They raved to him about what a beautiful day it was, what an incredible event, and how amazing the two teams were. He agreed (AGREEMENT), but then couldn’t help himself and finally had to move on to the central force of narrative (CONTRADICTION) by saying, “Yes, but let’s be honest, these aren’t the two best teams.”

CLANK. Way to lay a turd on the festivities. The two hosts didn’t know what to say. It was a day to honor the armed forces. There’s no way Obama or Hillary or even G.W. Bush would have said such a thing. They would have all just rolled with things and said, “Yes, this is great.” Especially Bush. If you doubt that, look at his Narrative Index values (But/And ratio) for all of his State of the Union addresses. Every one of them was under 10 for an average of 4, which is literally the same values as four equipment maintenance manuals I found online recently. He didn’t know how to disagree with anything.

TRUMP IS FOLLOWING “THE HIGH-CONTRADICTION DIET”

There are three fundamental forces of narrative: AGREEMENT, CONTRADICTION, CONSEQUENCE. If you want to understand a lot about your world quickly, start absorbing what those three forces mean. Don’t fight it. Accept that back in the 1700’s Hegel pointed it out with his triad, and then start realizing how the three forces explain just about everything when it comes to communication.

Realize that CONTRADICTION is at the core of narrative. Then think about the life of Donald Trump. Day in and day out, every single moment, his life is all about contradiction. He loves it, he relishes it, he bathes in it.

One more thing on El Presidente. It’s called The Narrative Index. It’s just the ratio of BUTs to ANDs in any given text. Have a look at this.

His Afghanistan speech on August 21 was restrained, controlled and tightly scripted. Look how few times he said BUT — a total of 9. His Narrative Index was 6.

Now look at his Phoenix speech last week was a 77 minute rant that was rich in ABT form. Just look at the first part of it. He opens with line after line of AGREEMENT, each of which is followed by applause. BUT THEN, he finally hits his source of contradiction with this line, “But the very dishonest media, those people right up there with all the cameras.” It’s his first BUT.

Guess what that line is met with — boos. That’s the start of his central narrative thread, laid out plain and simple.

Overall, look at the scores. His boring Afghanistan speech scores a 6, his barn burner Phoenix speech scores a 23. The man knows narrative — when to pull it back, when to lay it on. He continues to be a powerful mass communicator, despite what the eggheads are saying, hoping and praying.