If you run a workshop for speaking, writing, video making — pretty much any aspect of communication — the best participants you can have are those who have done our Story Circles Narrative Training program before they get to you.   We DO NOT address any of the specifics of these forms of communication workshops — no videotaping of presentations, no editing of writing samples, no directing of videos — that’s stuff for other folks to provide.  We work only on the fundamentals of how to shape material into strong narrative structure.  No one else provides this sort of long term, simple training that builds “narrative intuition,” which is the central element for effective communication.  Which means graduates of Story Circles are the ideal participants for other communications training. 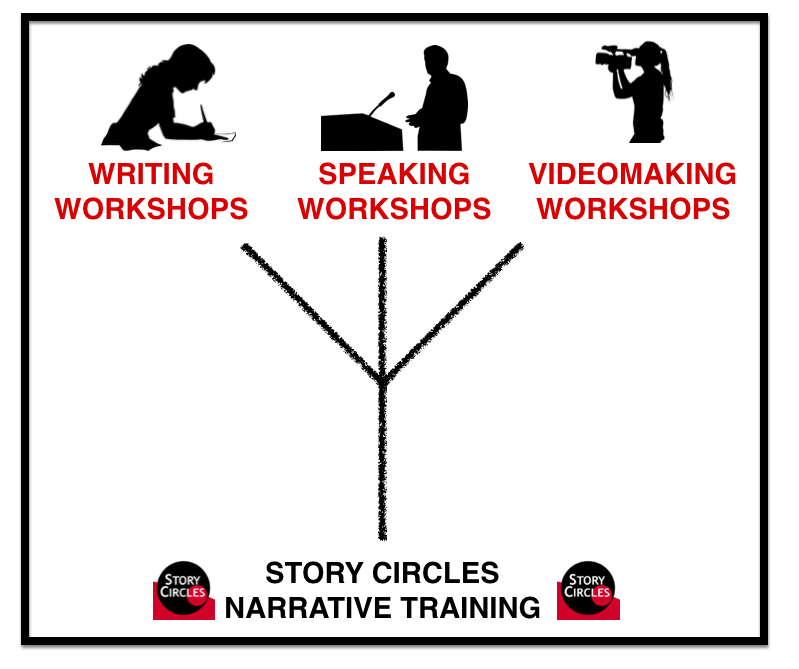 Graduates of Story Circles bring the ABT Framework to any communications workshops they take part in.

NO REASON TO BE “TURFY”

In a call last week with one of the groups we are doing Story Circles with, they made a comment about how “turfy” communications trainers can be.  It didn’t surprise me — I’ve experienced a bit of it myself.  But when it comes to Story Circles, there’s no reason for it.

We are not competing against anyone.  There’s no one else, that we know of, teaching the ABT Framework over the course of 10 one hour sessions.

One thing we’ve found with Story Circles is that it makes a huge difference whether the participants have read, “Houston, We Have A Narrative,” in advance.  The book is where the ABT Narrative Template is presented in detail.  If they have read it, they start at an advanced level.  And if they have both read it and discussed it — as is the case right now with the U.C. Davis grad students currently in circles at Bodge Marine Lab, then they have a double advantage.

All of this makes me think about applying to the graduate film production program at the University of Southern California.  In my class of 50 students probably about a third had never even tried to make a film before.

This surprised me at first, but then one of the professors explained their philosophy.  They believe that in film school they can teach you all the details of how to direct a film, how to operate a camera, how to edit a film.  That stuff is fairly informational and relatively easy to teach.

But the thing they can’t teach you so much is “how to tell a story.”  They have found that if you’re a lousy storyteller at the start, you’ll probably still be a lousy storyteller after three years.  You can improve a bit, but the process is so slow AND so important, that they opt to make it their highest priority for admissions — looking for applicants who already tell good stories, as reflected in the two required essays.

And that’s the bottom line — story is just about everything.  To be good at it, you need narrative intuition (or “story sense” as they call it in Hollywood).  Story Circles doesn’t make you instantly great with narrative, but with the ABT Framework it definitely sets you on the right path, making you ready to draw on the knowledge of narrative structure gained when taking subsequent communication workshops.