This is how you actually defeat Trump in a permanent way.  Not by endlessly, angrily whining about things not being fair, and chasing after his narrative (meaning MAGA), but by advancing your own narrative — meaning The Green New Deal.  You advance the new idea, and when the ankle-biters start pointing out that you haven’t worked out every detail or that some of it is unrealistic, you explain back that movements have to start in the gut with intuition before the analytical folks can move things to the head with consistent, logical explanations.   Alexandria Ocasio-Cortez is a true leader — something the Democratic party has lacked since Obama. 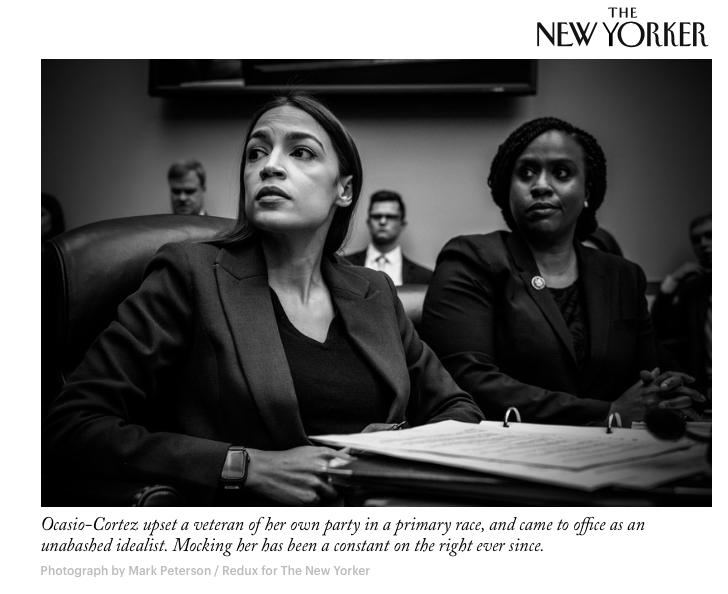 FROM THE NEW YORKER TODAY

Occupy Wall Street began in September, 2011 as a vague notion that the time had come to address income inequality.

It was soundly criticized, not just by the rich, but by the over-thinking eggheads of the progressive left who said it wasn’t “well thought out” or “realistic” or didn’t have a clear “plan of action.”

They were right — indeed it wasn’t well thought out or realistic, but it sowed the seeds of a movement that eventually found their candidate in Bernie Sanders who has taken the demands from marginal pipe dream to mainstream agenda. These things have to start in the gut with intuition, then eventually move to the head for the more specific, analytical elements.

Now the same thing is happening with the recently introduced “Green New Deal.” Rising Democratic party superstar Alexandria Octavio-Cortez has locked onto it. She is being criticized from both sides, but it doesn’t matter. She is also commanding all the attention right now, and that’s what is important in the “attention economy.”

More importantly, instead of burning up countless hours being incredulous over the lies Trump tells, she is moving forward with the Green New Deal. That is the eventual path to victory. You have to be the one who is advancing the narrative — that is what draws attention and support.