Sorry, but somebody needs to point this stuff out. Last month the U.N. released a Public Service Announcement (PSA) in advance of COP 26 that had almost all the same narrative elements of the greatest television commercial ever produced. All but one thing — NARRATIVE INTUITION. Dummies. Boring dummies. Worse, LECTURING boring climate dummies. Since when do we need a lecturing dinosaur? 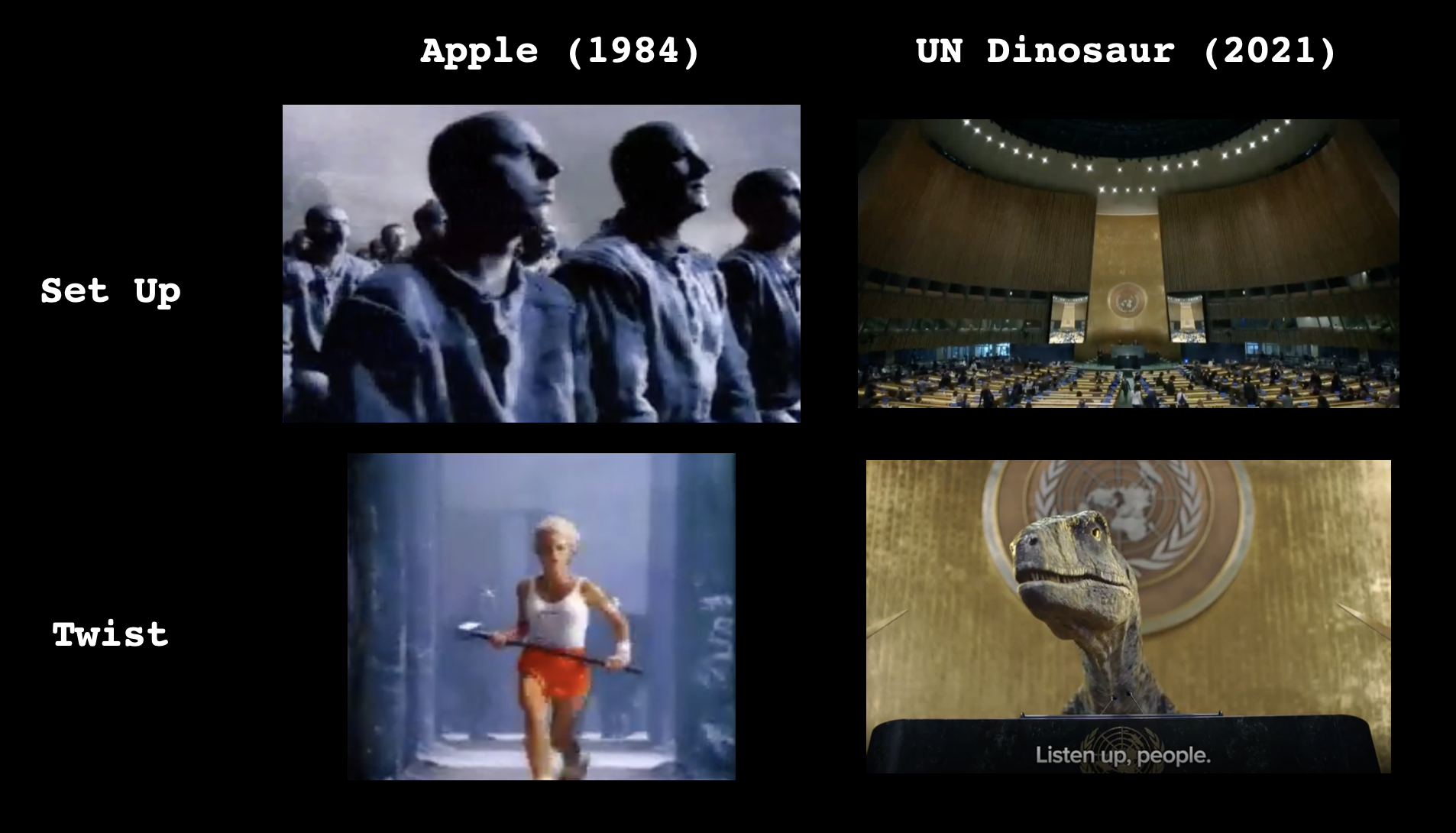 Two Short Pieces intended for the entire planet. One, concise and smart. The other … a lecturing dinosaur who went on and on and on with a confused lecture. Why?

Here’s what the dinosaur (sadly, voiced by comic genius Jack Black) said. White is off the narrative. Blue is set up. Red is problem. Purple is sidebar. Green is solution.

WANNA SEE HOW CLUELESS THE CLIMATE MOVEMENT IS?

Who wants to be lectured to in this day and age? Not me. Not anyone young who isn’t a climate worshipper.

Once upon a time there were leaders with powerful NARRATIVE INTUITION who roamed the planet. One of them was the great innovator Steve Jobs.

AND – gray zombie workers lifelessly view a giant screen giving commands
BUT – a rebellious woman in red shorts runs in and throws a hammer that shatters the screen
THEREFORE – tag line, “Apple is introducing MacIntosh, 1984 won’t be like 1984”

Last month the U.N. produced a PSA for COP 26 with similar structure, almost…

AND – the UN general assembly is meeting as per usual
BUT – a dinosaur takes the podium
THEREFORE – therefore we get … a 1.5 minute rambling lecture???

Do you see the similarities in the first two parts — the set up and twist? Then do you see the difference between the CONSEQUENCE elements?

One had the narrative sensibility to know to get out quick once the point is made.

The other droned on and on and on, wasting the talents of a great comic actor (Jack Black, the voice of the dinosaur) and then even worse, the day it was released, Rachael Maddow on MSNBC raved about the spot, basically calling it a masterpiece.

WHO WRITES THIS STUFF?

It’s all so symbolic of the entire climate movement of the past two decades, sort of beautifully so. It’s been one big movement of lecturing the public, scolding them, bombarding them, and then retreating in confusion as nobody listens.

As veteran Democratic party strategist James Carville talked about last spring in VOX, it’s really been the worst communicating movement in the history of the planet. He said, “Let me give you my favorite example of metropolitan, overeducated arrogance. Take the climate problem. Do you realize that climate is the only major social or political movement that I can think of that refuses to use emotion? Where’s the identifiable song? Where’s the bumper sticker? Where’s the slogan? Where’s the flag? Where’s the logo?”

I gave a talk a decade ago titled, “Dude, Where’s My Climate Movement?,” for the 50th anniversary of the World Wildlife Fund. Things were bad back then. They’ve only gotten worse.

And now the hero and presumed darling of the entire climate movement, Greta Thunberg, is turning on the entire movement with her “Blah, Blah, Blah,” critique, which sounds a lot like, “And, And, And.” She’s labeling them as boring, and failing to solve problems.