There’s a reason why university graduates are not very good with communication. It’s the same thing you see with film school graduates (whom Hollywood has traditionally laughed at). Universities develop intellect. It takes a different approach to develop intuition. It’s what Story Circles is designed for. 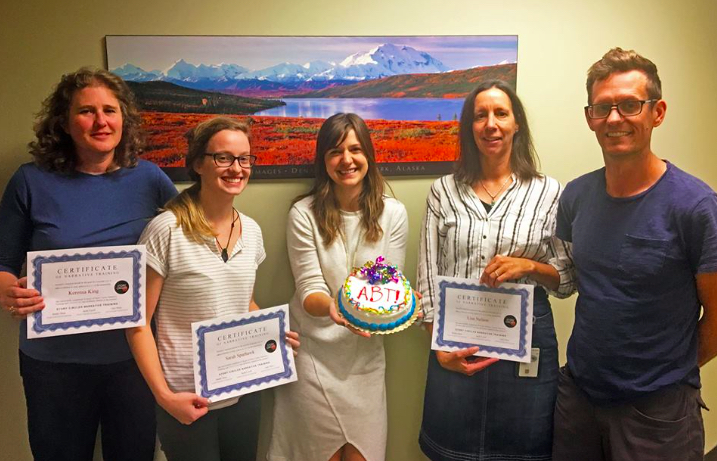 NATIONAL PARK SERVICE IN COLORADO: Celebrating completion of the first of six Story Circles that ran all summer. Complete with an ABT cake!

Once upon a time the educational world understood and accepted the need for repetition. It’s called inculcation — “the instilling of knowledge or values in someone, usually by repetition.” Inculcation is also the pathway to intuition.

I experienced plenty of inculcation in elementary school where we learned the alphabet and arithmetic through endless, sing-song repetitions. I didn’t get much repetition through high school, and by college I could tell it was looked down on as some sort of old fashioned technique for stupid people.

But then I entered into a two year Meisner acting class in 1994 in Santa Monica (and keep in mind that acting and communication are the same thing). Meisner is the technique that is revered by the greatest of actors from Grace Kelly and Gregory Peck to Robert Duvall and Diane Keaton. The Wikipedia entry for the Meisner Technique says:

The focus of the Meisner approach is for the actor to “get out of their head”, such that the actor is behaving instinctively to the surrounding environment. To this end, some exercises for the Meisner technique are rooted in repetition so that the words are deemed insignificant compared to the underlying emotion.

There you have it. The word “repetition” and the idea of having people “get out of their head.” If you take a look at all that I’ve written and preached for the past 20 years for communication in general, those are the two most important underlying principles.

My first book, “Don’t Be Such A Scientist” (second edition coming in March) was built around the Four Organs theory that we learned in the Meisner class. It was all about “coming down out of the head.” The class was also built around endless repetition.

As I said, somewhere along the way the smarty pantses in the ivory tower decided that repetition is for slow learners. I think it’s something along the lines of, “Only dummies need things repeated.”

That attitude is fine if all you want to achieve is intellect. That’s what universities do. They are great at producing intellectuals. But there’s a problem when university graduates go out into the real world, which is that they lack intuition. Especially when it comes to communication.

We saw it at USC film school. In our orientation the older graduate students (well, actually, I was older than just about all of the students from the start) explained to the new students that when you finish film school, Hollywood is going to hire you for one main reason, which was not your ability to do the visceral/intuitive part of filmmaking as a director or even cinematographer. No, what Hollywood looks to film schools for is writing — the more cerebral element.

They mostly laugh at the directing and visual skills of film school grads. Why? Because new graduates lack experience, which means they lack the visceral elements. If you want to see a perfect comic picture of this watch, “The Big Picture,” which came out in 1989 but is pretty much timeless. One of the opening scenes is of three film school students and their lousy, clunky student award-winning films. We had to sit through hundreds of such films in film school. It’s what happens with communication when people lack experience.

STORY CIRCLES: NO LECTURES, NO NOTES, NO READINGS, JUST EXPERIENCE

I think there are a lot of people in the science world who want to be told they are wonderful communicators. Improv classes are certainly great for building comfort and self-esteem. But at some point you might as well accept that getting good at communication requires experience. And as everyone always likes to say in every profession in the world, “There’s no substitute for experience.”

So this is what our Story Circles Narrative Training program is built around — not feeding knowledge, just gaining experience. The whole realization of how it differs from university courses became clear to me last spring when a professor told me about his course on “narrative for scientists” he was teaching at his university. He felt it was similar to what I do. I asked if the ABT was part of it, he enthusiastically said, “Yes! It’s an entire third of a lecture!” Which meant what he’s doing is not at all similar to what we do.

With Story Circles the ABT is just about all there is. There’s no lectures, no notes, no readings. It’s not a university course. It’s training, similar to going to the gym and lifting weights. It’s “conditioning.”

The result of this is we’ve had some graduate students show no interest — saying, “I got it on the ABT — And, But, Therefore — all set, why should I spend an hour a week for ten weeks when that’s all there is?” But the response is completely different with government agencies and the scientists I work with at Genentech. They know that the practical side of anything takes repetition and experience. So they get it.

And now we’re getting to see how well they get it. A couple weeks ago I posted this set of comments from a recent grad. Last week we had the first of a half dozen Story Circles finish that have been running all summer in Colorado with the National Park Service.

We know from past graduates that the training takes time. That’s the whole deal with both narrative and intuition — they take time. But for those who go the distance, we’re seeing the development of what I’ve termed “narrative intuition.” The consequences of this end up being the term that NSF wore out long ago — that the training is, “transformative.”