Working with Doug Parsons, host of America Adapts: the Climate Change Podcast, we produced a 3 part series on the issue of climate adaptation for the state of California.  It’s sponsored by UCLA’s Institute of Environment and Sustainability, and features a half dozen of their faculty.  The mood of the piece is light, but the actual contents are pretty dark as 20 experts weigh in with a fairly grim prognosis.  The predictions paint a picture of a state that will increasingly look like Baja for vegetation due to wildfire, has an approaching, “freight train of pain” for the issue of drought, and ultimately will confront “the greatest crisis humanity will ever face,” with sea level rise.  We were hoping for a happier ending.  Oh, well. 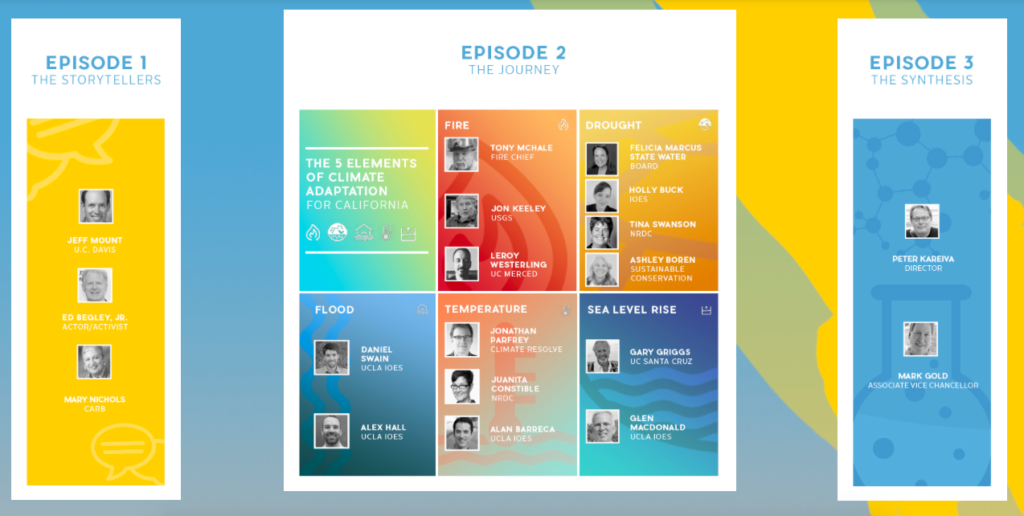 TWO CAREER FIRES IN ONE YEAR

Last month Doug Parsons and I produced, “California Adapts” a 3 part special for his podcast, “America Adapts: The Climate Change Podcast,” that takes a close look at the state of California.  Given that most of America now accepts that climate is changing (check out the report released this week from the Yale climate folks arguing this), it’s time to focus more on the question of, “So how are you gonna handle it?”

The podcast opens with Jeff Mount of U.C. Davis doing a powerful job of telling about the great flood of 1861/62 that so devastated Sacramento the capital had to be temporarily moved to San Francisco.  From there, Mary Nichols (long time head of California’s Air Resources Board) and actor/environmentalist Ed Begley, Jr. tell the story of how Los Angeles solved the smog problem of the 1970’s.

These two stories set the stage for the journey Doug takes around the state in the second episode.  We divided the issue of climate adaptation into five main topics — fire, flood, drought, temperature and sea level rise.   For each one he goes out into the field with an expert, then we interview others in search of a clear idea of how prepared the state is for climate change.

In the final episode we go back to a few of the experts to ask them for their bottom line opinion on what the future will look like.  The answers range from somewhat unsettling to very unsettling.

I have to say, it certainly opened my eyes to how serious the problems are.  One of the most disconcerting bits is when Fire Captain Tony McHale of the Ojai Fire Station talks about the term “career fire” which means a once in a lifetime-sized fire.  He says, “We’ve had two career fires in the past year — what does that say?”

The big problem is infrastructure.  The future is going to need new approaches, and while it’s clear that there are lots of plans and ideas on how to deal with it, what’s not so clear is where the resources are going to come from and when the major actions are going to begin.