On Saturday night comedian Michelle Wolf blew the doors off the White House Correspondents Dinner, besting even Stephen Colbert’s famous 2006 performance. Her Narrative Index (But/And ratio) was a sky high 47 — the highest I’ve ever measured.  I’ve been saying this for a while — it’s what you get with comedians — very dense, concise ABT structure.  Bill Maher’s monologues average 33. Imagine what would have happened if Michelle Wolf had been head speech writer for Hillary Clinton.  I’m serious. 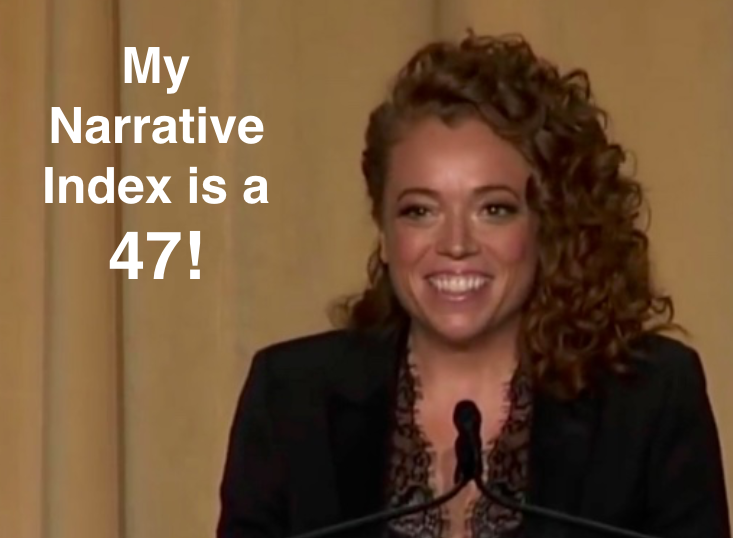 NARRATIVE THAT BITES RATHER THAN BORES.

Here’s the ABT Framework analysis. Look at her stats:

The Narrative Index is just the ratio of BUTs to ANDs.  I’ve been studying it for three years now.  I’ve calculated it for at least 2,000 speeches.  None has ever scored this high.

But Michelle Wolf … in addition to lighting the White House Correspondents Dinner on fire (even more than Stephen Colbert’s gutsy performance during the Bush years), she managed to ring the bell like no one ever before.

These things go hand in hand.  For comedy to work, it has to be tight.  Her comedy was incredibly tight.  The Narrative Index reveals this quantitatively.

POLITICIAN, GET THEE A COMEDIAN

I’m so serious about this it’s painful.  How dense can politicians be?  Get yourself a comedian for your writing staff.  NOT to write jokes.  Get a comedian because they have what I termed in “Houston, We Have A Narrative,” the essential quality of “narrative intuition” if they’re any good.

Comedians get this stuff.  They bore easily.  That’s what you want in order to reach the masses —  someone who is not enthralled by your economic eight point plan.

Form matters.  If jokes are long, boring or confusing they will destroy the performance.  Comedians understand form at an intuitive level.  Most politicians don’t, but they should.

Just to see how she uses the word “but” to turn so many of her lines, here’s the first five occurrences of it in her speech:

I never really thought I’d be a comedian, but I did take an aptitude test in 7th grade,

People are saying America is more divided than ever, but I think no matter what you support politically, we can all agree this is a great time for craft stores.

I know there’s a lot of people that want me to talk about Russia and Putin and collusion, but I’m not going to do that because there’s also a lot of liberal media here and I’ve never really wanted to know what any of you look like when you orgasm.

Trump isn’t here, if you haven’t noticed, he’s not here. And I know, I know, I would drag him here myself, but it turns out the president of the United States is the one pussy you’re not allowed to grab.

Now, I know people really want me to go after Trump tonight, but I think we should give the president credit when he deserves it.