I’m sure this isn’t appreciated, but what can you do.  It’s very simple.  Look at the molasses of their abstract, then look at the clarity and simplicity that the ABT structure brings.  It’s a prime example of the obfuscation problem identified 45 years ago by Michael Crichton. 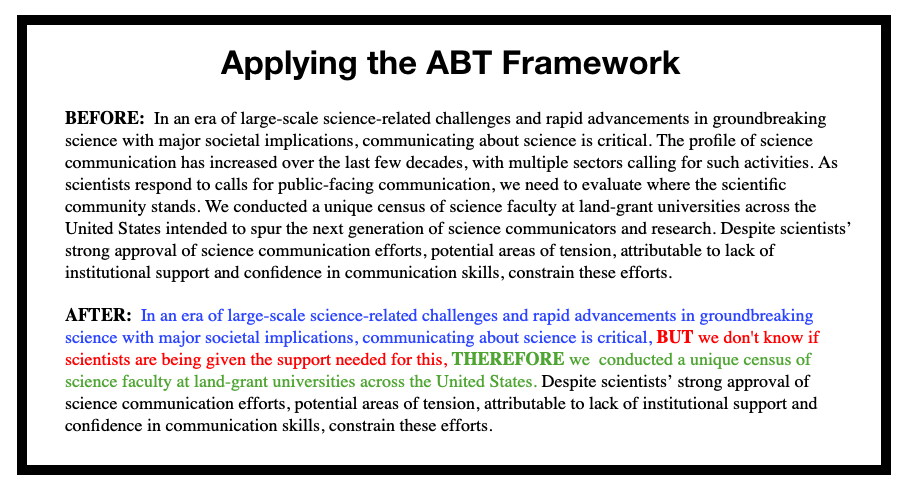 OBFUSCATION IS THE PROBLEM

There’s no need for detailed explication.  In 1975, then-biomedical researcher Michael Crichton (later to be the author of “Jurassic Park,” among a wealth of science communication feats), published an appropriately concise paper identifying “obfuscation” as the prime target for effective science communication.

His paper was ignored, and as a result, today we have authorities on science communication practicing obfuscation as they try to explain how it works.

Just look at these two versions of the abstract for a paper appearing this month in the Proceedings of the National Academy of Sciences titled, “Scientists’ Incentives and Attitudes Towards Public Communication.”  It’s not that their version is wrong, it just has poor narrative structure, making it difficult to read (i.e. poorly communicated).

This is what the ABT Framework is about.  It’s not easy, but it’s essential if anyone is ever going to make any progress against the problem of obfuscation that was identified so simply so long ago.